A little while ago, a lovely chap named Robert Zak wrote an article for us in which he mourned the fact that Gathering Storm would be the first Civilization expansion he wouldn’t buy. He predicted that its standout systems – the World Congress and climate change – wouldn’t offer meaningful new ways to play.

So far, he’s right. Based on the 15 hours I’ve played, the new systems haven’t made much impact. And yet I’m still having fun. It’s the new civs, not the systems, that are the real stars of Gathering Storm.

Many, even most, of the new arrivals seem designed to engage you with some of Civ VI’s neglected features. I’m not sure I’ve ever levied a city-state’s military before, but they get stronger and faster when Hungary’s Matthias Corvinius does so, and he pays nothing to upgrade them. You’d be mad not to use this when playing Domination, and Gathering Storm is full of tempting new opportunities like these. Dido can move her capital to any city with a Cothon, or fancy harbour for those of you without a Phoenician background. Any coastal cities on her capital’s continent will be 100% loyal. This means you can forward-settle again, and chase Golden Ages for an aggressive, loyalty flipping game. On the downside, settling on or near the coast means you’ll have to contend with rising sea levels.

Kupe of the Maori gets bonus production from woods and rainforests, but only if you respect the natural world and don’t ‘improve’ them. If you want to use this ability and yet stay competitive with everyone else’s mines, you need lots of land, and you need the citizens to work it. That’s also how you utilise the Maori’s Maraes, which grant bonus faith, culture, and – later – tourism from terrain features. So you’re chasing a Cultural victory, but you’ll do it mainly through national parks and seaside resorts – the Maori can’t ever earn Great Writers, and the Marae doesn’t have any Great Work slots. 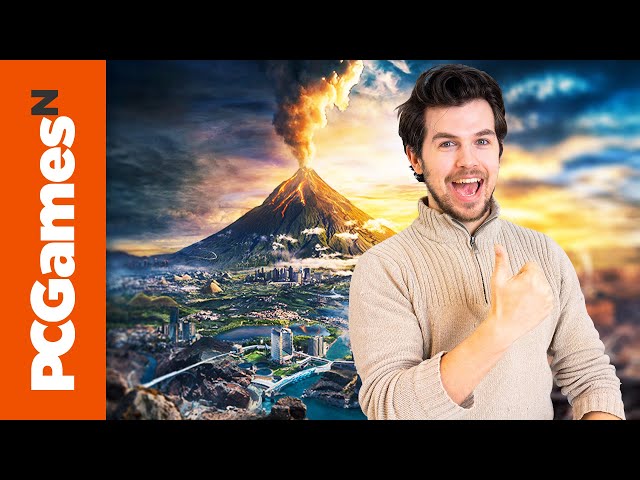 I could go on, but you get the point. Civ bonuses used to feel like small nudges toward a particular victory type or playstyle, but not such radical ones that they violated whole strategies. Those nudges got more violent in Civ VI, and in Gathering Storm, they’re as forceful as any of the game’s dramatic weather events.

Compared with these tornadoes in the rulebook, the systemic changes do fade slightly into the background. Natural disasters occur reasonably often on the default intensity, but they’ll miss you for most of the game, savagely flooding a stretch of empty desert or a poor herd of cattle instead. As your empire grows, there’s less empty space for them to batter without you noticing, but all they’ll ever do is annoy you, interrupting production while you repair a district or crank out a builder to fix an improvement. You can mitigate floods by building a dam, which confers some useful benefits, but otherwise natural disasters have only proved to be a nuisance. 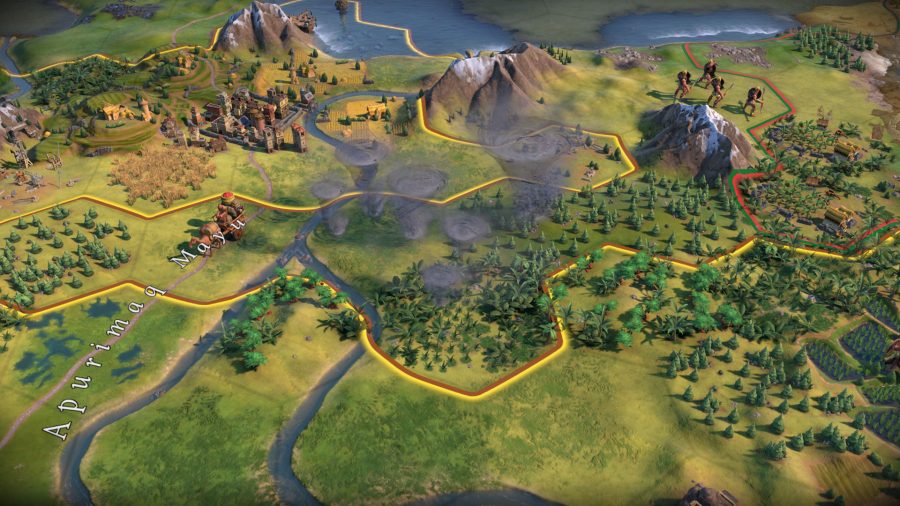 I can’t yet say that climate change is meaningless on the whole, since I’ve only made it to the Information Age in one of my games: my Pachacuti campaign, in which I turned the difficulty down to Prince so I’d have an easy ride and get to see everything. This means that everyone else is in my dust and no one has polluted the planet. The World Congress hasn’t even held a World Leader vote yet.

It has met several times for other votes, however, and frankly I’m a little disappointed. I haven’t yet seen any mechanism by which I can become its chairman or its host, or set its agenda – as far as I can tell, the two resolutions on which you can vote in any given session are randomly generated. They’re more detailed than before, which is satisfying – you can specify the variety of district, Great Person, or luxury good that a resolution will target, as well as whether its effect will be positive or negative – but I’ve not yet been able to choose a resolution to propose. This means I feel unable to use the World Congress to persecute people – say, by banning their main luxury exports or imposing a trade embargo – which, to my inner Machiavelli, was the whole point. 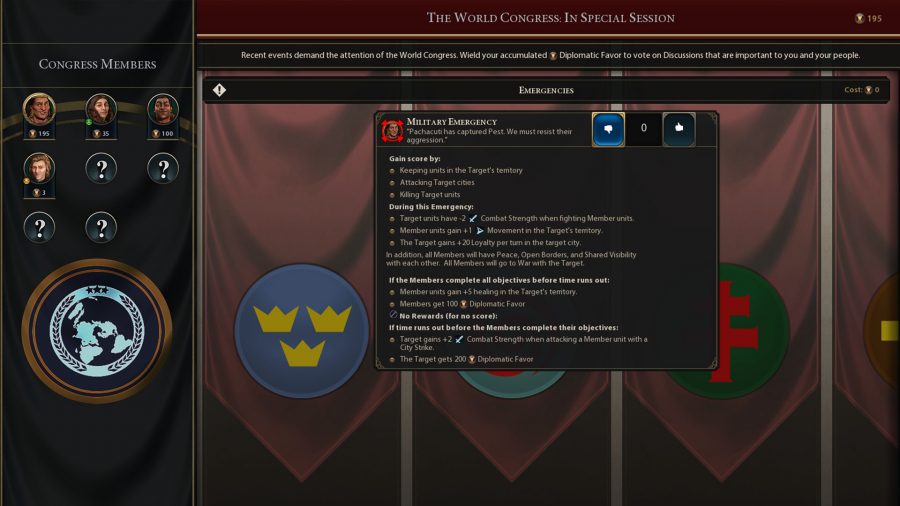 But there’s more to get excited for in Gathering Storm, such as the revisions to strategic resources, power, and the new favour and grievance systems in diplomacy. I’ve really enjoyed these so far. Early in my Pachacuti game, Matthias backstabbed me, and I have always felt that taking one or two of an aggressor’s cities is a legitimate reprimand for something so scurrilous.

In Civ VI previously, this proportionate response would’ve slapped you with a ‘warmonger’ reputation that wouldn’t wash off. This time, I merely draw against the huge credit of grievances that Matthias’s initial treachery has given me, and my reputation remais unblemished. He still tried to declare an emergency against me, but no-one voted for it, and I really hope that result will recur every time in similar circumstances. Getting shafted by an emergency after getting backstabbed would be an even more offensive injustice than the previous system.

Read more: Exploit our list of the best 4X games on PC

Much has been made of the headline features in Gathering Storm, but the headline isn’t the whole story. Don’t be discouraged if you read that natural disasters are annoying or that the World Congress is shallow – many of the smaller refinements are shaping up well, and having had a bite of several of the new civs, I won’t feel like my review is authoritative until I’ve finished them off. Come back for our official verdict when I’ve had a chance to do that.