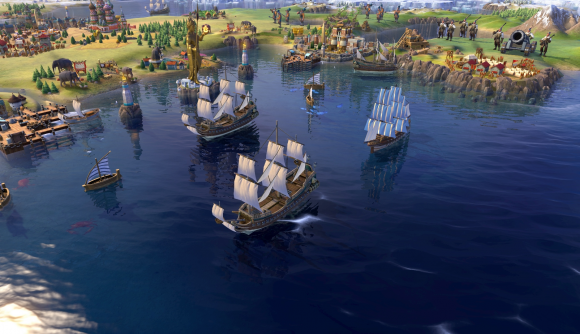 The Civilization series has changed a lot over the years, and as it’s grown and adapted, certain features have been left in the dustbin of history. One of those is the bonus you’d get in Civilization IV for being the first to circumnavigate the globe. Now, an exploration-minded modder has added that back into Civilization VI, giving would-be Magellans out there a new glimmer of hope.

The First to Circumnavigate mod (which is rather unfortunately misspelled as ‘Circumnagivate’ on the Steam Workshop) reintroduces this Civ bonus for Civilization VI. The deal is that the first civ to make a complete trip around the globe gains a permanent +1 bonus to all naval units’ movement. By default, Civilization VI notes that you’ve accomplished this feat, but it no longer confers any bonus for doing so. This mod, created by modder Sailor Cat, restores the bonus.

If you’re the type who enjoys charting the known world, Sailor Cat has another mod you might be interested in. It’s the Natural Wonder Explorer mod, which gives the first civ to find all the natural wonders permanent visibility over those sites and their adjacent tiles. It kicks in at the beginning of the turn after you’ve discovered them all.

For the First to Circumnavigate mod, you’ll need either the Rise & Fall or Gathering Storm DLC packs for Civilization VI.

Civilization VI’s next free update is out tomorrow, February 25, and it’s bringing a bunch of welcome changes to the 4X game, including the new Barbarian Clans mode and a leader selection pool – it works basically like a pick-and-ban phase for leaders during game setup.