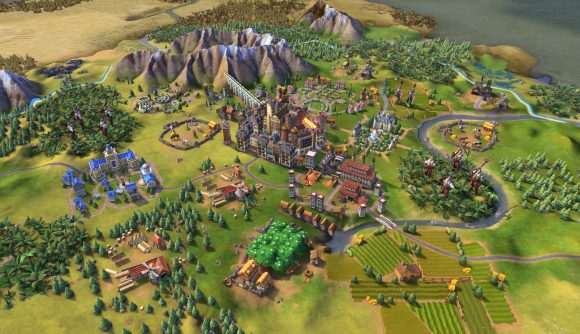 If you’ve been pondering a dive into Civilization VI, now’s your chance, as the strategy game is now having a free weekend on Steam. Between now and July 27, you can sample the sixth entry in the Sid Meier’s classic series, from developer Firaxis Games, before potentially buying the full version at a heavy discount.

The free weekend coincides with the launch of the Ethiopia Pack, the latest content rollout in the 4X game‘s season pass. It brings the Ethiopia civilization, new leader Menelik II, a new district for diplomacy, and a new game mode, Secret Societies, that throws eldritch cultists and vampires, among other slightly off-putting additions, into the mix.

Civilization VI first launched back in 2016, bringing fresh perspective to a reliable formula. The object of the game is the same as always – grow your civilization from meager beginnings to a world superpower, working towards one of several specific goals to achieve victory. In the four years since release, Civ VI has gotten two major expansions, a battle royale mode (that’s now narrated by Sean Bean), the aforementioned season pass, and a growing number of mods, if the content from Firaxis isn’t exciting enough.

We gave the base game a glowing review, Robert Zak writing: “But if someone asked you to capture the spirit of Civilization, then this is definitely it. More than any other Civ game, VI is a joy to be in.” Our praise did cool for the expansions Rise and Fall and Gathering Storm, but not by much.

You can get in on the free weekend through Steam here, where you’ll also find the 75% off discount should you like what you play. Don’t forget to check out our guide to the best Civilization 6 leaders, if you’d like some tips on being a decent world leader.