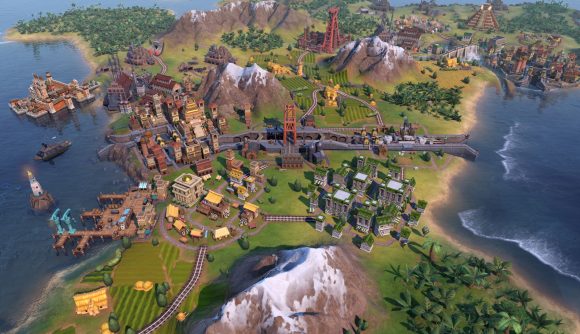 If you’re looking for new ways to build out your cities in Civilization VI, we’ve got good news: prolific modder JNR has a new mod out called District Expansion: Industry, and it completely shakes up the way you’ll want to plan for production sectors in the 4X game. Adding an additional development tier as well as brand new buildings, District Expansion: Industry is all about letting you purpose-build the type of industry you want to use in each city.

With the mod active, industrial zones will unlock when you finish researching construction. The water mill has been moved from the city center tile to the industrial zone, and it becomes your tier 1 industrial building (which you’ll be able to use only if the zone is built on a river, naturally).

At tier two, you gain access to the workshop and manufactury. The workshop provides +1 production per governor promotion in the city. The manufactury has an additional specialist slot, and specialists get +1 production each. These become available once you’ve researched mass production. Tier three includes the factory (+0.3 production per citizen), which is unlocked at industrialization, and the chemical plant (+5% production in its city for each unique strategic resource), which is unlocked at refining.

Check out our guide to the best Civ 6 mods – there are instructions included there on how to get started modding the popular strategy game. Then head over to the Steam workshop to subscribe to the District Expansion: Industry mod. Note that you’ll need both the Gathering Storm and Rise & Fall expansions to use it. It’s also worth checking out the rest of JNR’s Urban Complexity collection, which includes a total of 21 mods to make your cities that much more interesting.