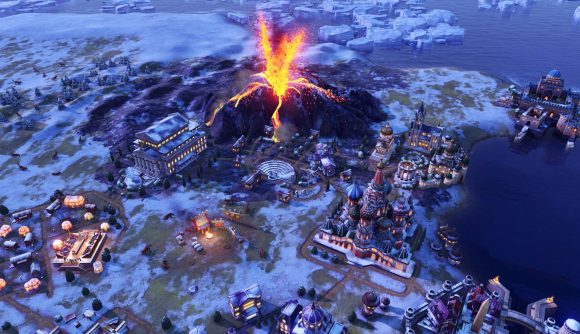 Civilization VI’s new Gathering Storm expansion is all about the relationship between humans and the Earth – and a big part of that is climate change.

But even though Gathering Storm models the effects of increased carbon levels in the atmosphere, Firaxis’ developers say the expansion doesn’t plot out a right or wrong path for players to take when reckoning with climate change.

Civilization VI’s lead designer Ed Beech says the theory behind Gathering Storm’s approach to climate change is a 6,000-year push-pull between people and their environment. The effects of human development are now a more important part of the game, and players will be able to experiment with how their decisions impact that environment. But Gathering Storm itself is morally agnostic about how you decide to proceed.

“We’re not saying that there’s a right path or a wrong path,” he said.
In fact, being a ruthless coal-fired villain can be a strategic advantage.
“There are actually some devious ecological things that you can do,” he said. “Maybe your neighbor has more coastal [settlements] than you do, so actually the rising sea levels might not hurt you, they’ll only hurt your neighbour. So you’ll have to make decisions about that.”

But Gathering Storm gives players a lot of control when setting up games, so the destructive forces of nature – man-made or otherwise – aren’t something you’re required to deal with if you’d rather play a more traditional round of Civilization.

“Players have a [lot of] control when they start their game as to how much of this kind of stuff they want,” Beech said. “We have some people in a test group that are like, ‘I love chaos, I just want to play in the most chaotic world possible.’ So we have this slider that you can set to five different settings on it.”

We’ve done a deep-dive on Civilization VI: Gathering Storm, which has boatloads more details about the coming expansion. According to Firaxis, it’s the biggest expansion they’ve ever created in Civilization’s, er, long history. Whether you decide to go green or let it burn, well… they’re leaving that up to you.