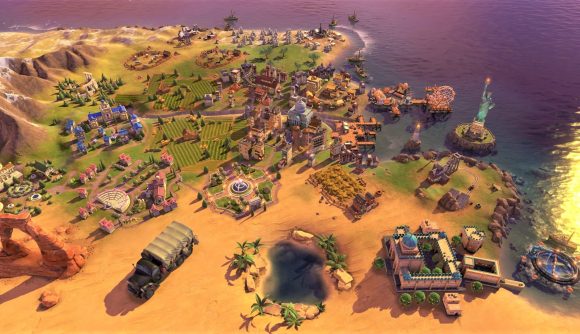 Palaces are a pretty key facet of Civilization 6, serving as your civilization’s seat of government in the heart of its capital city. Curiously, though, some of the 4X game’s civs share the same palace design as several others – for example, the Indians, Arabs, Persians, and Scythians share a Mughal architecture-style building reportedly inspired by Humayun’s Tomb in Delhi, India. One fan, though, has now decided to give each of these civs’ palaces more of their own distinct identity with some neat design concepts.

Civ 6 fan henrique3d has shared their designs on the strategy game’s subreddit (below), explaining that they wanted to create some “unique designs” for the palaces that share their appearance across civs, such as those listed above, noting that “the architecture of those four civilizations is extremely diverse”. The creator offers some details about the inspirations they took for each of their concepts, with Arabia’s being the Medieval-era architecture of Egypt’s capital, Cairo. Examples cited are the Cairo Citadel and Hassan Mosque.

For the Persian’s palace, the creator took inspiration from “the Achaemenid architecture of Persia, under Cyrus the Great, such as the Apadana and the Gate of All Nations“.

India’s version most closely resembles the base game’s Mughal palace, but henrique3d has leaned into this style of architecture even further, with white domes and red walls that are inspired by India’s Humayun’s Tomb and the Badsahi Mosque found in Pakistan. The Scythians’ palace was the “most challenging”, the creator notes, this being an ancient nomadic people whose style of architecture is less well-known about. The modder instead took inspiration from Central Asian nomadic peoples’ yurts to create a palace for the Scythians. You can check out their design concepts below:

The designs are proving popular with the Civ 6 community so far, with the post hitting around 1,300 upvotes as of writing and getting a bunch of positive comments. Sadly, the creator says they’re “not planning to make a real mod” as they’re not a modder – to the disappointment of some in the comments – but invites others to use them as inspiration.

If you’re keen to introduce some palace-focused tweaks to your game, though, another Civ 6 mod recently reintroduced classic Civ-style upgradeable throne rooms and palaces which you can find out more about at that link.