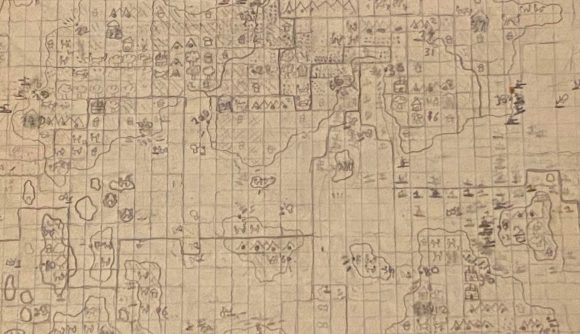 Every current PC gamer can probably think back to a time when videogames were unaffordable – when you’re a kid, money is usually pretty hard to come by. One Redditor says that while they waited to be able to afford the real McCoy, they created a version of Civilization to play in their notebook at school. They called it ‘Paper Civ.’

Alexander-00AK says ‘Paper Civ’ kept him busy in school “while the rest of my class was taking notes.” In a post to the Civilization subreddit, Alexander-00AK includes several photographs of old games – meticulously hand-drawn maps on graph paper showing the locations of coastlines, resources, mountains, and cities. It’s an honest-to-God 4X game, brought to life in a student’s notebook.

Paper Civ was a lot more than mere notebook doodles, however – Alexander-00AK had a full ruleset developed, with specifications for how each resource tile near a city was to work, how each special building works, for unit movement and combat, and for settlers and expansion. Military units could be stacked, but had a per-turn gold cost, and everything takes into account the population you’ve accumulated by controlling cities.

It’s an impressive enough system, as described, that several commenters have suggested to Alexander-00AK that it should be further developed into its own board game – “Alexander AK’s Civilized Nations“, one impressed commenter suggests as a title.

Before I ever had money for civ, I had to make up my own version that could be written out and played on paper. I called it “paper civ” from r/civ

We’ve got a guide to the best Civilization 6 civilisations handy if you’re playing the modern format. If you want to know who to pick in Paper Civ, though, you’ll have to ask Alexander-00AK.