Sooner or later in any game of Civilization VI, you’re going to run into issues that have to do with having too much or too little of something. That’s where trade comes in, but that means calling all the 4X game’s rival leaders up and finding out what kinds of prices they’re willing to offer you. With the Quick Deals mod, you can look at all available trade options in a single panel and select the ones that are most advantageous with a single click.

Quick Deals by user wltk puts all your potential trade deals in a single menu panel, which is an elegant way to save time and effort on the part of the player. You’ll see new buttons on the main screen that take you to the panel, and they even have notification badges that pop up to let you know about any new potential deals that have popped up.

Pull up the Quick Deals menu, and you’ll see options for sale and purchase. The sale screen lists the resources and great works you have available to sell, as well as the leaders who are willing to make offers on those goods. The purchase screen shows you what leaders are offering as well as their minimum price. You simply click ‘accept deal’ to establish the trade agreement.

Better yet, the deals are all sorted from most to least profitable, so you won’t even need to sift through a long list to find the most financially beneficial arrangement. 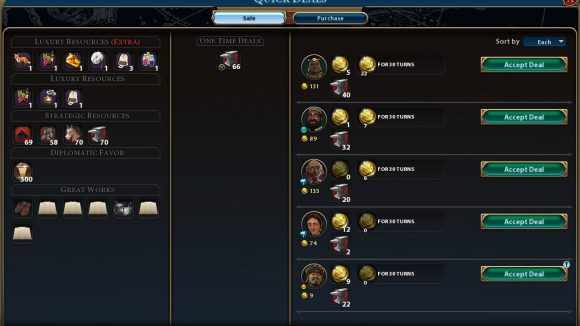 If a deal isn’t quite to your liking, you can always just click on the leader’s portrait in the menu to modify the terms. Simple!

Our list of the best Civ 6 mods includes astog’s Better Trade Screen, which is definitely a handy mod for keeping track of trade routes you’ve established. But Quick Deals means it’ll be much less of a chore make your trade arrangements profitable in the short term.