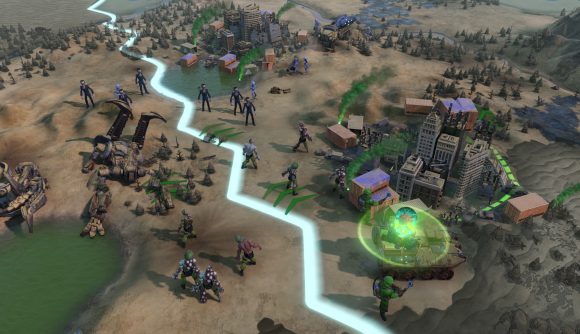 Ahead of next week’s community update, Firaxis has revealed some of the content coming to Civilization VI. Heralding the start of Season 2 of Civilization VI: Red Death, players will have two new factions to play around with in the mode when the update rolls out, and Game of Thrones actor Sean Bean is lending his dulcet tones to the strategy game‘s mode.

The new pair of factions are aliens and zombies. Suitably enough, zombies means all the combat units are just piles of undead controlled by a brain in a jar, who can convert enemies into mindless walking dead. You’ll need to be careful though, because all that rotting flesh means zombies take damage every turn. Aliens, then, have a nifty cloaking ability, for sneaking around enemies or escaping tough situations. They have health regeneration, too, so take no prisoners if you’re on the opposing end.

All factions will have new unique abilities in Season 2, though the accompanying developer update didn’t go into detail on any of those for the time-being. Most importantly, though, Sean Bean will now be narrating your skirmishes in Red Death’s toxic storm, having previously narrated the base game, making every round feel like its own great fantasy tale.

Several of the developers go through the various other bits and bobs that will be altered in the update in the video below. Some exploits are being closed off, like getting multiple pantheon bonuses in multiplayer, and the ability to duplicate districts within the same city.

The free community update are part of the ongoing New Frontier Pass, with a roadmap that stretches into March 2021. The next update comes out June 25.