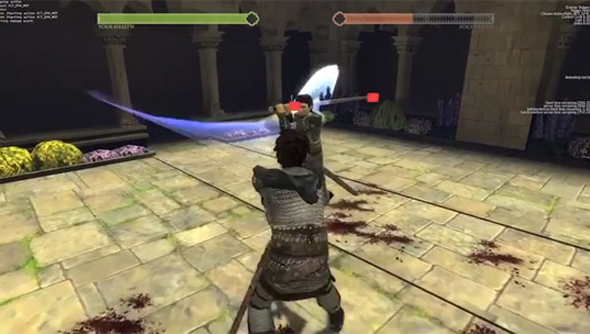 More than a year ago Clang, a kickstarted swordfighting simulator, was put on hold by its developers. They’d burned through the $500,000 raised through crowdfunding and hadn’t found a publisher to take on the costs of making their prototype into a full game.

A year on and with no change in its successes Neal Stephenson, the author who fronted the campaign, has officially cancelled the project. This is so, he says, so “future announcements can then happen in their own good time, giving any new projects a fresh start.”

“A year has passed since our ‘pause button update,’ and it’s been a busy year,” Stephenson writes in an explanatory update on Kickstarter. “To explain everything that I and others have done on the CLANG and post-CLANG fronts since then would require a book.”

The short version is that Subutai competed their prototype and donor rewards and while “technically innovative” Stephenson admits “it wasn’t very fun to play.” He says one of the reasons for this was that he “probably focused too much on historical accuracy and not enough on making it sufficiently fun to attract additional investment.”

When a publisher couldn’t be found the team found “new ideas and opportunities presented themselves.” Many of them a result of “experience that was gained and connections to the industry that were made during that project.” (I wonder if a project at Valve was on the cards. After all, Gabe did appear in one of their videos.)

Part of the reason for the year long update silence is that Stephenson was waiting for one of these projects to become something he could talk about. “I kept thinking that at least one of them would reach a point where I could describe it in something other than generalities.”

With that long silence Stephenson has decided that “it’s cleaner and simpler to cut the cord, and announce the termination of CLANG. Future announcements can then happen in their own good time, giving any new projects a fresh start.”

Controversially, the team have only refunded some of the backers. They read through emails they’d received since the beginning of the campaign, looking for those who had asked for refunds and “identified around two dozen”. It seems that anyone looking for a refund after this announcement is shit out of luck. This is something that, if you read the comments on the update, hasn’t gone down too well with the backers.

Where do you stand on the issue, should backers accept the risk of loss that comes with backing a project or should the team have not refunded some backers instead of all?