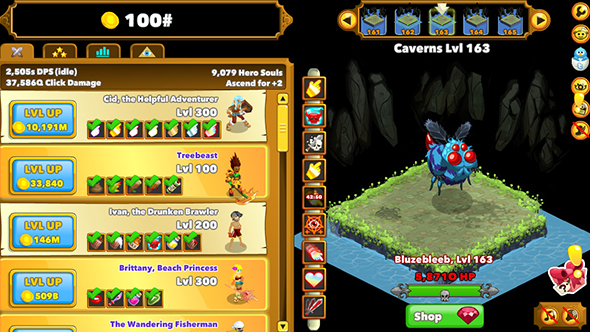 Playsaurus, the developers behind Clicker Heroes, have been threatened with legal action by a company claiming to hold a patent for the use of “electronic tokens.” GTX Corp say that Clicker Heroes infringes on that patent, and are threatening a lawsuit if Playsaurus do not pay a $35,000 license fee.

Thomas Wolfley, CEO of Playsaurus, says that the organization is “getting shaken down by patent trolls for using ‘virtual currency’ in our game.”

He says “I believe their claims are completely meritless and their behavior to be abusive and terribly unethical. As I am a major owner of Playsaurus I see this as a personal attack, and the cost in my own time and well-being has already been significant and draining. It is a shame that the United States legal system can’t provide a quick and easy way for us to punish them for these actions.”

Various companies have attempted to take legal action regarding the patent, including in a 2009 lawsuit against companies including Amazon and Google. That case was settled. Miguel Bombach, Wolfley’s attorney, said in a return letter to GTX Corp that “You cannot now take that same patent and, a decade later, try to extract more money against developers who list their games on the Apple and Google store. Your attempted double-dipping is inappropriate.”

Wolfley believes GTX Corp are targeting his company and other small developers without the resources necessary to easily fight patent claims.

The upcoming Clicker Heroes 2 will drop the previous game’s free-to-play model, due to “ethical reasons” including players dropping thousands of dollars on in-game currency.