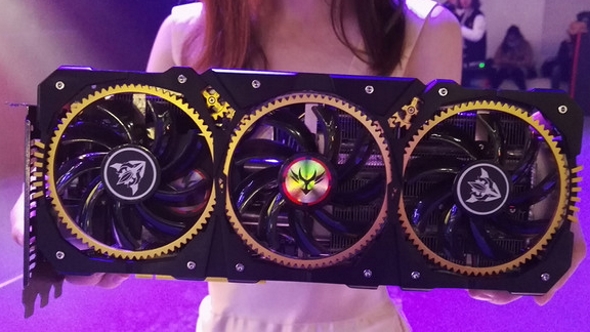 Quake, puny PC. Colorful’s iGame 1080 Kudan will crush your weakheart motherboard beneath its massive frame. Such is the power caged up inside the graphics behemoth only four slots of PCIe space is enough for it.

Quite obviously this monster will be the ultimate graphics card, but what’s the best graphics card you can buy right now? Allow us to enlighten…

At first I thought the Kudan was some sort of novelty oversize foam graphics card model from looking at the pictures. Y’know, those fun things the wacky kids wave around at PC eSports events (probably). But no, it’s an actual, honest-to-good-gracious graphics card you can use to bench press with.

By the way, the lady in the picture above isn’t holding it; such is the gravitational pull of this monster she’s locked in a geostationary orbit around it.

At its heart is one of Nvidia’s 16nm GP104 GPUs, with 2,560 CUDA cores and 8GB GDDR5X making up its memory subsystem. So yeah, it is essentially just a GTX 1080 but with a higher clockspeed than the base design; Colorful have got the chip boosting to 1,936MHz out of the box. 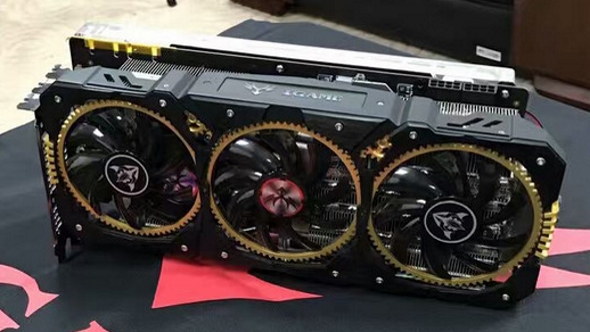 But you’d hope for a little more overclocking headroom given the ludicrous cooling array that’s surrounding that unassuming slice of Nvidia silicon. It’s a hybrid design, allowing you to plumb it into a full water-cooling loop to augment the cooling performance of those chunky air-cooled heatsinks. 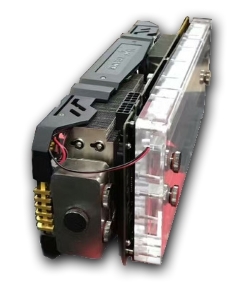 Because of the water block backplate though it needs a little thought to fitting it into your rig – it’s unlikely to sit comfortably in the first PCIe slot with that big rear so you’ll need to push it into a secondary connection. I’d also probably recommend picking a motherboard with reinforced PCIe slots because if this bloated card is side-mounted without support there’s going to be one hell of a cascade failure as it tears down through your rig.

According to Videocardz the iGame 1080 Kudan is going on sale in December or January, likely with a price tag to match its insane girth. Personally, I’m putting the GTX 1080 Kudan in a file marked ‘Pointless waste of time, money and fans with gold-painted cog surrounds,’ but then I’m still hoping for a return to the days of beautiful single-slot cards like the wondrous 8800GT.

All that said, if you can find me someone who spends their own cash on one and doesn’t get a fatal attack of buyer’s remorse the second Nvidia announce the GTX 1080 Ti then I’ll eat a Titan X.