Colorful has released its SL500 Mini SATA SSD, and while you’re probably rolling your eyes at the thought of SATA being remotely newsworthy in 2021, there’s something special here – it’s the smallest SSD you can buy right now. Weighing in at 2g with a size of just 2.6×6.8cm, Colorful says it’s perfect for both a mini gaming PC, laptops, or industrial use thanks to heat and vibration resistance.

There’s still some life left for SATA-based SSDs  as they offer a significantly cheaper price-per-GB over their NVMe counterparts, while still providing a massive upgrade from a hard disk drive. The speed of Colorful’s teeny SSD is nothing to write home about, similar to what you’ll find on most standard SATA SSDs, with read and write speeds of 480MB/s and 500MB/s respectively. If you’re looking for the best SSD for gaming, then you’ll want to be looking elsewhere at NVMe-based drives.

We think it’s more likely to be sold for industry applications rather than consumers, thanks to most of the best gaming laptops or mini gaming PCs having more than enough room for a 2.5-inch drive. But, if you do want the smallest SSD just for the hell of it, it’ll set you back a reasonable $39.99 for the 250GB model or $59.99 for the 500GB model. There’s no word on UK pricing, however.

When comparing the internals to a standard 2.5-inch SATA SSD, it looks comically small. This is thanks to Colorful using a “SATA Disk in Package” PCB which combines both the SSD controller and the flash memory onto a single module to reduce the profile. 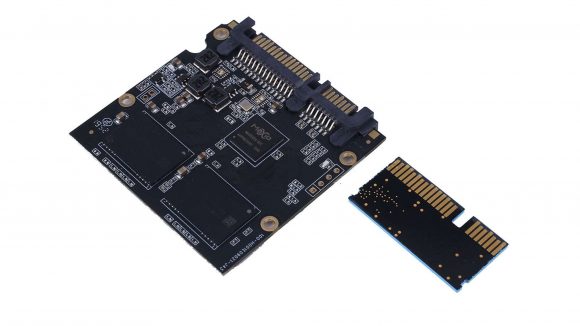 If you’re solely looking at how much storage you can stuff into the smallest package though, SanDisk’s 1TB MicroSD card would still take the crown. But, with 170MB/s read speeds it’s almost half the speed of Colorful’s SL500 Mini.