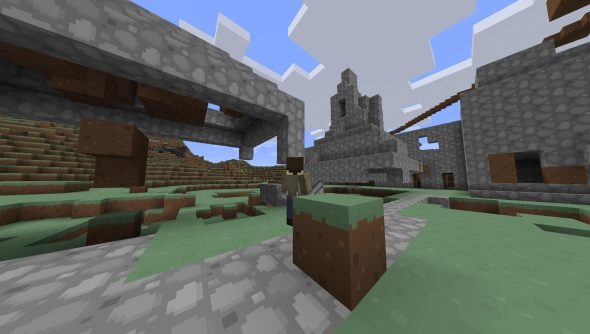 Anyone who’s built an amazing representation of their genitals in Minecraft knows the frustration that getting that cubic masterpiece into the real-world. There’s no easy way of sharing your home builds with the world, but its something the Mojangstas are working on. The direction they’re taking Minecraft in will eventually make no distinction between single and multiplayer.

This is huge and fundamentally changes the way you’ll plat the game. The seeds were sown in the 12w18a snapshot that the company released: when you start a single-player game it creates a multiplayer server. This has a couple of major implications: it takes all the hassle out of running a server on your PC. You don’t need to do anything, and in fact you have no choice, Minecraft has no distinction between the two states: you start an SP game and you’re actually playing in a MP server. To make it MP, all you need to do is invite friends into the game. They can be either online or on the LAN.
The pluses are enormous: god knows how often I’ve wanted a spare pair of hands on my genit – I mean castle. I build castles. But the current minuses really do show the differences between the two modes: all the glitches you get in MP are brought into the offline world, so the current snapshot is hellishly unstable, with a few additional bugs for good measure. But it also means that the developers are working one one core game, and not two different modes, so bugs are potentially easier to squash.
I think it’s the right direction: it gives every player the opportunity to build their own little Minecraft community. It brings a nice, homely feel to the game: “Come in, visit my cave, I’m having a small party next week to celebrate the opening of the aquarium.” As long as you wipe your feet, you’re all welcome in my world.