Less than two years ago, EA announced Command & Conquer: Rivals. I’m all for new ideas and all against the extreme things that people can threaten to do when they’re angry on the internet, but it’s not to legitimise that reaction to be genuinely confused about what the publisher was hoping to achieve.

C&C’s last main sequence release was Tiberian Twilight, way back in 2010. I would love to see EA’s audience research on Rivals because I can’t think of a single reason to imagine a substantial overlap between people who care about this series and those who play a lot of mobile games. The outrage among hardcore C&C fans was 100% guaranteed, as inevitable as the solar cycle, and I really wonder whether the C&C name won over mobile gamers in sufficient numbers to consider that price worth paying.

And yet, only four months after EA announced Rivals at E3 2018, it announced the C&C Remastered Collection. It did so on Reddit, directly to the C&C community, and before a single line of code had been written – in a sign of its determination to include the fans from the very beginning. In the context of Rivals, it was a U-turn so abrupt and substantial that you can practically hear the tires screeching.

That impression has only deepened after an hour’s demo and Q&A with producer, Jim Vessela.

In C&C Remastered you don’t have to search your memory or your imagination – you can see the difference by switching between old and new graphics in real time, a press of the spacebar smoothing out jagged edges, enriching colours, and adding shadow and definition to the sprites. The remaster adds just enough detail that you’d believe it was always intended, but was obscured beneath a haze of pixels – like a sculptor returning to a statue after 25 years of practice to, as Michaelangelo apparently didn’t say, chip away some more pieces that didn’t look like the original vision. 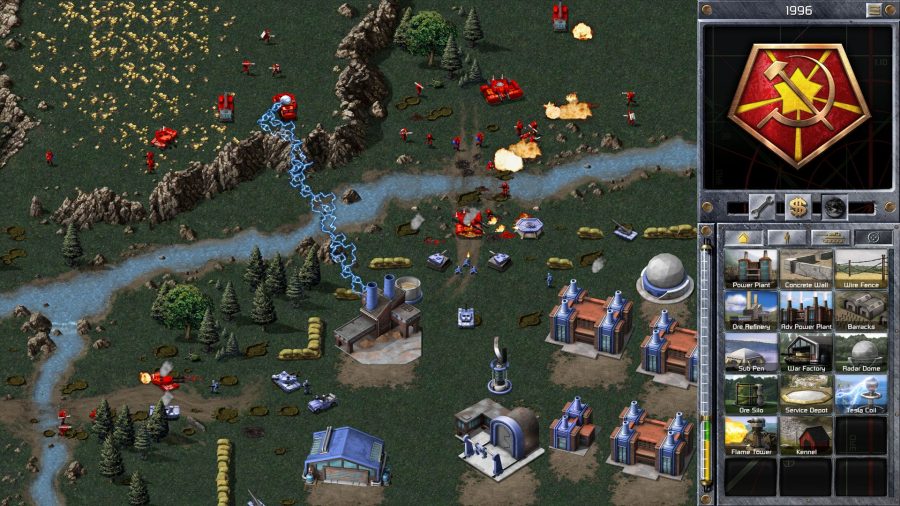 Vessela shows this off in the first mission of the Allied campaign in Red Alert. You can pick out the windows and roof vents in the ore refinery now, and see more clearly where its roofs join one another. Rather than a black Star Destroyer with smoke stacks, it’s become an edgy, brutalist monument of 20th century industry. You can just about see the hammer and sickle on the flag above the Soviet barracks. Those random blue blobs around the base of the War Factory? Turns out they’re propane tanks. Who knew?

Pathfinding, damage, and balance will be fairly identical to the original game

Unlike their more plausible incarnations in Red Alert 2 and 3, Tesla coils still look like what a theme park prop designer would come up with if given the brief ‘robot lollipop’, but there’s a pearlescent sheen to the ball on top (the top load electrode, Wikipedia tells me), and a metallic one to its secondary coil. The spirit is still there but has reached a higher plane of always-plausible detail.

You can also zoom in and out, which in practice essentially means changing the game’s resolution in real time – you can shift between the original DOS version’s 320×200 to the Windows 95 version’s 640×400. If you play on classic graphics in 320×200, Vessela says you’re basically playing the original game; the remaster is built largely from the same old source code, “a large portion” of which the team were able to recover. Steve Tall, lead programmer on the original Red Alert and technical director at Petroglyph, even stumbled across his own comments in code from 25 years ago. 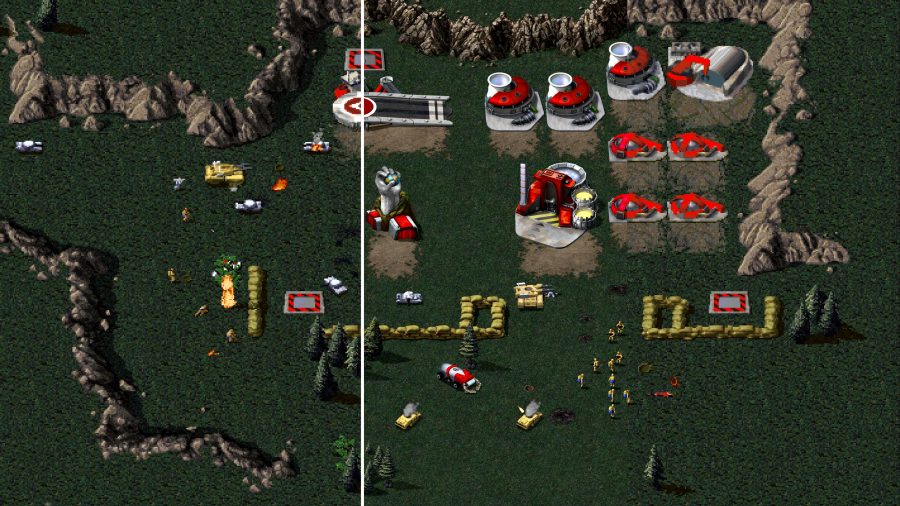 Beyond graphics, though, a thorny question is whether the ’90s AI and game balance will be overhauled. Pathfinding issues from another era resurfaced in both the Age of Empires and Warcraft III remasters and, to my mind at least, didn’t take long to revert from ‘frustrating, but in a nostalgic, charming way, like an elderly relative who won’t stop questioning your tech-focused career choices’ to plain old frustrating.

Vessela says that while “hundreds” of old bugs identified by the community have been fixed, many via the community’s own fan patches, “the pathfinding, the damage, and the balance” will be kept “fairly identical to the original game”. The team found that tweaking such things, especially on the balance side, caused a cascade of ripple effects that fundamentally changed how missions played – an extra point of range, for instance, might enable a unit to take out a defence building with impunity or win certain 1v1s that it couldn’t before.

Makes sense for the campaign, but how about multiplayer? The original C&C and Red Alert were simply not fair – GDI was pretty clearly better than Nod and few units in either game were competitive, causing matches to devolve into races to make more of those that were. Microsoft’s Adam Isgreen told us of a similar phenomenon ahead of the Age of Empires remaster – there, Vietnam’s hardcore Age community had worked out that there was no point doing anything other than spamming Chariot Archers.

Progenitor: The best strategy games would be different without C&C

The word on this is that multiplayer balance will be close to the original games at launch, and EA will “kinda see how it goes”, Vessela says, pointing out that modern quality of life features such as unit queueing and hotkeys might change the balance in themselves. EA will keep an eye on it and, if overly dominant strategies emerge again, sounds willing to take action. 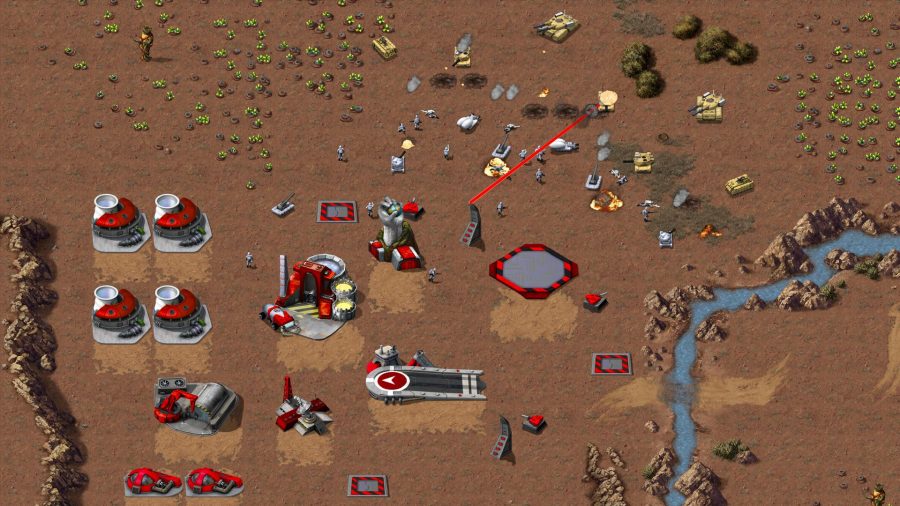 All well and good, but – so far – no more than the community would hope for from a decent remaster. It’s in the additional features that EA really impressed me with just how far they’re going to find and add value for nostalgic C&C fans.

Most importantly, we on PC can expect some new content. I vaguely knew that Command and Conquer and Red Alert both released on the original PlayStation, providing some of the earliest evidence for the largely correct view that RTS doesn’t really work on console (notwithstanding the possible exception of Halo Wars). I didn’t, however, know that they got new missions when they did. Those console missions will be bundled in with the Remaster Collection and so will be available on PC for the first time.

Petroglyph has also built a map editor from scratch, which will allow you to create multiplayer, skirmish, and single-player maps with some basic scripting. You can then share these with the community, and anyone can download and play them via a new menu option, so we’ll also get to enjoy the players’ potentially limitless creativity at our fingertips. 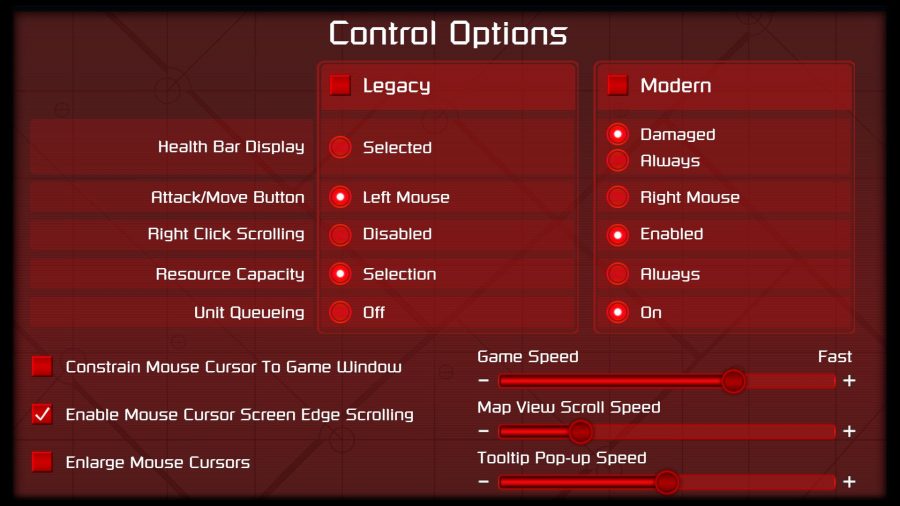 This is alongside a whole host of welcome quality-of-life and accessibility features. Red Alert’s difficulty settings system will be brought over to C&C for the first time; subtitles in eight languages have been added to the in-game cinematics; you can customise all your hotkeys including a bunch of new functions; you can switch between classic and modern control schemes – the latter using RMB rather than LMB to issue attack/move orders, for instance.

Unlike Warcraft 3: Reforged, it looks like the only surprises in the C&C Remaster will be pleasant ones

The industrial/electronic rock score for both games – which actually merits the overused adjective ‘iconic’ – has been fully re-recorded by original composer Frank Klepacki and his band the Tiberian Sons. You can choose it or the classic mixes, or can draw freely from both to make your own custom playlist in the in-game jukebox. SFX and voices have also been remastered or in some cases entirely re-recorded – most notably, that includes all of your digital assistant EVA’s lines, courtesy of original voice actor Kia Huntzinger.

In fact, it may be easier to list original features which are not selectable options. One of the few things on that list is the classic interface. The UI has been updated in line with the later C&C entries, with their three-wide sidebar, and the old UI is not coming back. This, as with pretty much everything else, was a decision reached alongside the community. 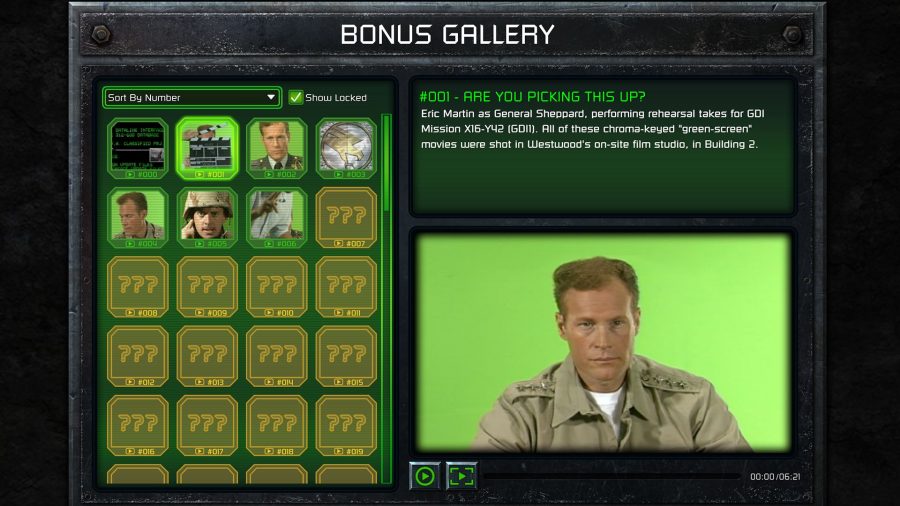 Finally, there’s the bonus gallery, where a whole host of assorted treats will unlock as you progress through the game. Vessela says that much of this has been drawn from a Westwood studios archive of old betacam tapes, and shows such behind-the-scenes footage as Frank Klepacki’s recording sessions or Kane actor Joe Kucan directing cinematics on a green screen. There’s some four hours of this, much of it digitised for the very first time.

As the recent Warcraft III: Reforged controversy has demonstrated, remasters are a tricky proposition, but at least Blizzard has provided a case study for what not to do. The nasty surprises that sparked all the outrage on Reforged’s launch, such as a lacklustre cutscene overhaul, a revised EULA for custom content, and missing features in the new client, all boiled down to a massive failure of communication on Blizzard’s part.

Feeling nostalgic? Check out the best classic games on PC

So far, by contrast, EA is nailing it. Discussions with the community have been integral to this project from its outset, and there’s clearly been an earnest, exhaustive effort to think of ways to add value above and beyond merely updating the graphics. If there are any surprises at launch, it looks like they will be pleasant ones. And this treatment is applied to two full games with three expansions, all for two-thirds the price of Reforged.

The C&C Remastered Collection is due for release on June 5 on both EA Origin and Steam. It’ll set you back $19.99, and includes Command & Conquer, Red Alert, and all three of their expansion packs (Covert Operations, Counterstrike, and Aftermath).