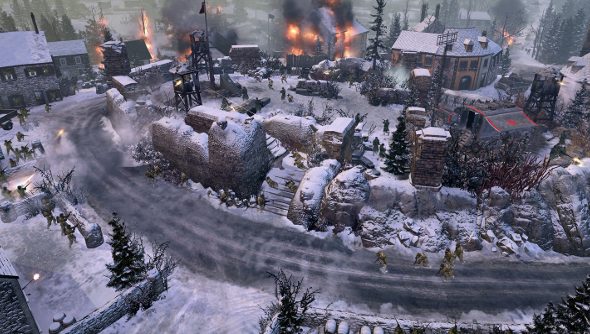 The lack of a single-player campaign wasn’t a problem, but Relic’s decided to make one anyway, which is certainly nice if you don’t really fancy competing against other players. Ardennes Assault brings back the US Forces and Oberkommando West from Western Front Armies, and throws them against each other in 18 missions inspired by the Battle of the Bulge.

The missions will be played from the US Forces point of view, with the German mechanised beast serving as antagonist. But to keeping things interesting, there will be three brand new companies within the US Forces to choose from, each including their own unique officers and special abilities.

It’s a dynamic campaign too, apparently. The impact of player decisions will affect the landscape, and choices like how to upgrade your forces will have long term effects, since all of those things carry over from mission to mission. Yep, there’s persistency, and that’s just lovely.

“We can’t wait to bring our players this awesome new single-player campaign for Company of Heroes 2,” said Relic executive producer Greg Wilson. ”We managed to include more missions in this expansion than we had in the original release and it’s packed full of great new features which we’ll be revealing over the coming months.”

You’ll be able to bugger off to the Ardennes come November 18th.