The British are coming! To Company of Heroes 2, that is. Last week, Sega and Relic announced the next expansion for their World War 2 RTS: the standalone British Forces DLC. To get an idea of how the stalwart Brits fit into Company of Heroes 2, we had a chat with game director Quinn Duffy and got the skinny.

When it came to researching the British forces, Relic was able to leverage their past experience with the Commonwealth in the original Company of Heroes. They already had a good idea of how British troops could function in an RTS.

“Once they grabbed a piece of ground and were able to dig in, it was pretty rare for the Germans to push them off,” Duffy explained. And this durable, tough defense has found its way into their digital counterpart. The Brits are strong defensive fighters. 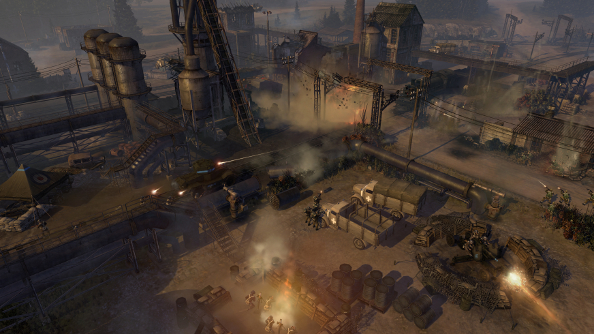 But giving them one wheelhouse wasn’t really enough. The existing armies, like their German counterparts, the Oberkommando West, from the Western Front Armies expansion, have a variety of tactics and routes they can go down, though they retain specific strengths and weaknesses. Relic didn’t want to make the Brits they guys who just hunker down and wait for enemies to come to them.

“We wanted the players to be able to choose between offense and defense, so from that standpoint the British have kind of a custom feel,” Duffy said. “As you move up the tech tree you get to make choices in what we call the Hammer and the Anvil. The Hammer units are hard hitting and mobile, things like the cruiser tanks, whereas the Anvil units are able to absorb punishment and hold a piece of ground, and in that choice you get more replacements, you get the heavy infantry tanks like the Churchill, things that can take a beating.”

So their niche is the ability to be either mobile and heavy-hitting or defensive, with engineers building emplacements and infantry tanks locking down areas, letting enemies smash themselves up against them. 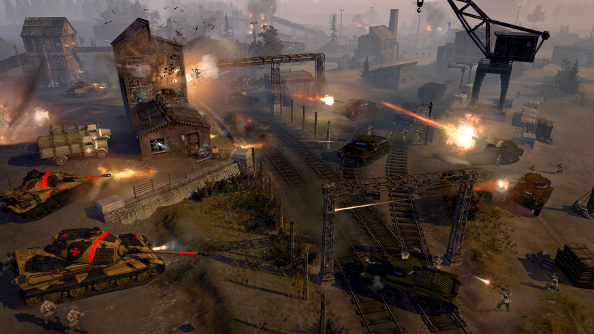 These two divergent paths also makes them well suited to team games. One player can play the Anvil role, defending zones and creating an area for teammates to fall back to, and another can play more aggressively, going down the Hammer route, roaming and rampaging throughout the map with their cruiser tanks.

If you’re infantry minded, or maybe you’ve just spent a bit too much time with the Oberkommando West and their tough but mobile range of vehicles and you want a change, then the Brits might be just what you need. They’ve got some of the best infantry in the game.

“They’re fundamentally the toughest infantry, if you play tactically with them,” said Duffy. “So they are really the best infantry in the game if you’re in cover. So we wanted to enforce the idea that you want to play tactically with the British. That works well in their defensive nature as well. They can hold a line of cover and be very effective. Their output firepower is pretty high when they are in cover.” 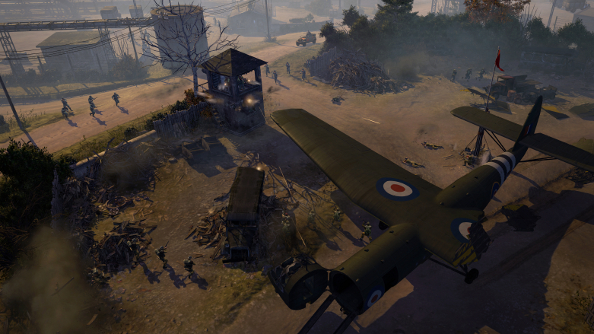 Those are your core units, but when you get up to the second tier you’ve got some interesting choices, like the Royal Engineers – Relic have them made Welsh in attempt to give regional character to different units – who will build larger emplacements. Then there’s a fancy new sniper, a Scot, wielding a Boys anti-tank rifle that can temporarily disable vehicles with an armour piercing shot. It’s not all vulnerable, fleshy men, though. You’ve got your AEC Mk III heavy armoured car, the balanced Cromwell tank – the British version of the Sherman, both mobile and reasonably armoured – and the various heavy Churchills, with flamethrowers and mortars.

The Brits have six new commanders, three of which will be available right off the bat. Relic wanted to, with the commanders, capture what Montgomery and others called “set piece battles.” 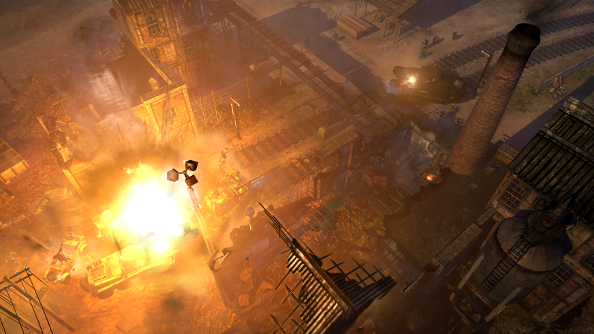 “These were intricately timed, involved all aspects of the armed forces, they used bombers, they would use strike aircraft, they would use artillery smoke – all kinds of things on very rigorous timetables, and when it worked, it worked spectacularly well, and sometimes it didn’t and the attack broke down.”

“It’s a relatively simple army to play in terms of the tech tree,” Duffy noted. “There are a couple of pivotal choices you make moving up, in terms of whether you go Hammer or Anvil, but the base is basically established for you, so you can spend more time out in the field focusing on tactics. The base even as you expand comes with the 25 pounders, so as you move up the tech tree you’re adding artillery to your base and that gives you some extra firepower and coverage.”

While Relic expects Company of Heroes 2 veterans to pick up the DLC for the new maps and a new army, it also sees the expansion as appealing to a wider audience. Despite being a multiplayer expansion absent a scripted narrative, the setting and themes are hooks for new players.

There’s the romantic notions of the brave Brits going off to fight the bad guys, leaving their family back home. You can see it in the teaser trailer, which is essentially a piece of propaganda. And in the maps you can see hints of a wartime narrative. The Allies have pushed into Germany, it’s further along in the war, and the scenes of demolished, ruined industry are almost post-apocalyptic.

The British Forces has something for everyone, Relic hopes.

It’s due out on September 3rd.