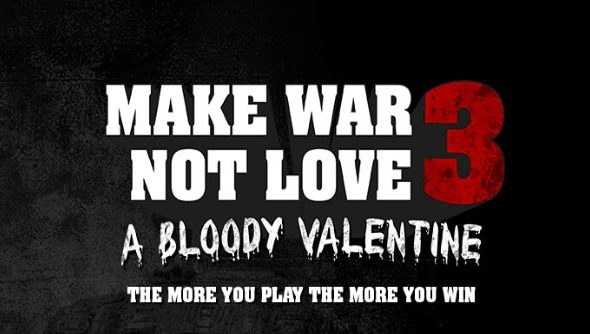 Sega announced today that Make War Not Love 3, the third annual Relic versus Creative Assembly community event, is set to return on February 14. Previous year’s have seen Company of Heroes 2 players go head-to-head with the Total War community – it’s 2-0 to the former, for the record – but 2016’s event throws Warhammer 40K: Dawn of War II into the RTS virtual Valentine’s’ Day massacre mix.

Make War Not Love is a bit of an RTS overload – much like our list of the best strategy games on PC.

Make War Not Love 3 kicks off on February 14 at 6pm GMT/10am PST and will run for four days until February 20. To take part, all that’s required is that you play your game of choice as much as you possibly can. Sound doable? All matches completed in each game will then be tallied up before being “weighted using a formula that would make even Alan Turing’s head spin.”

Every 48 hours, the leading community will unlock a selection of games from Sega’s back catalogue to download for free, and the winning community, when it’s all said and done, will unlock “a piece of content specific to their game” also free-of-charge. For Company of Heroes 2, it will be multiplayer standalone The British Forces; for Dawn of War II, it’ll be Tau Commander (for Retribution); and for Total War: Attila, it’ll be a new and as yet unannounced piece of DLC. Expect more details on what that’ll entail once the contest gets underway.

If new players fancy getting in on the action, all three games will be available to buy with 75 percent off for the duration of the competition. They’ll also go for free from Thursday February 18 until Saturday February 20.

To find out more, head over to the contest’s website. Until then, the trash talking has already begun, courtesy of the three games’ community managers:

“They say war is hell,” says Total War’s Craig Laycock. “It is when you’re bad at it. Now we’re not ones to point fingers, but it looks to us like Relic are playing the numbers game this year, fielding two teams against our one. I can’t remember what they’re called. Company of War and Dawn of Heroes or something…it’s not important. What’s important is that our community take arms and slowly crush their souls into a fine pulp during this proud competition. That’s what’s important.”

“Who are these amateurs?” asks Dawn of War’s Kellie Goggins. “They are all but heretics who don’t know their place. They shouldn’t fool themselves. We have been fighting for thousands of years, war is all we are, killing is all we are good for! If they feel they have even the slightest chance, it is a delusion. We will crush their hopes, their dreams and claim this as an easy victory for the Emperor.”

“Total War? More like Total Disaster,” says Company of Heroes’ Kyle Fehr. “Last I checked they were 0 – 2 down. Seriously though, all this pwning of Total War and I am still ‘Hun-gry’ for more. Can’t wait to crush their cavalry on their puny donkeys or whatever they ride with our mobile artillery. As for these Dawn of War newbs joining the party, they might as well go back to bed and watch some real soldiers show them how to fight. It’s going to take more than some green pirates to slow down our war machine.”