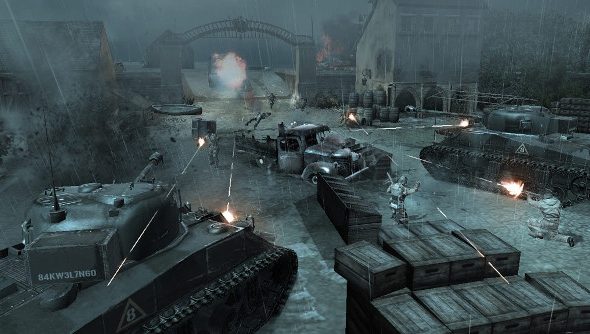 I loved the British army in the original Company of Heroes. They cursed and swore better than anyone else in the game, they had a really interesting emphasis on command and control, and were a turtler’s dream thanks to some of the best defensive firepower and emplacements in the game. They were my beloved bulldogs.

So I’m curious to see how Relic are going to improve on their original design for the faction in Company of Heroes 2, which will receive its British Forces expansion in early September. Fortunately, longtime Company of Heroes designer Quinn Duffy just recorded an interesting video diary outlining Relic’s approach.

As I wrote last week, Britain’s war in Europe was a lot uglier, meaner, and bloodier than the highlight-reel that is best remembered. And I’m excited to see that side of Britain’s war seems to the focus for Duffy and and Relic in this video.

However, it looks like we’ll be getting a slightly more versatile version of the British Forces than we saw in Company of Heroes 1. Notice how this video starts with clips of a briefing on Market Garden, the massive airborne operation that was meant to bypass the Siegfried Line via Holland? And how Duffy calls out Northern Irish commandos? Looks like the new-school Brits will be more about their elite special forces than before.

The press release with the video seems to confirm this: “With a military tactical doctrine that balanced mobility and defense, The British Forces gives players a choice in how they progress through the tech tree. They can either follow an ‘anvil’ approach by adopting powerful defensive positions through the use of emplacements or they can take an aggressive ‘hammer’ approach by using fast, hard-hitting units to wreak havoc on the battlefield.”

That’s a pretty cool faction description. With my love of set-piece battles, I suspect I’ll be more on the anvil side of the equation than the hammer, but it will interesting if the British forces end up having the kind of bio / mech split that you see within StarCraft 2’s Terrans, or if there is a little more space to effectively meld the “heavy, slow, powerful” with the “light, fast, maneuverable” approach.

As an aside, we hosted Duffy on Three Moves Ahead a couple years ago to talk about the series as a whole and his approach with Company of Heroes 2.