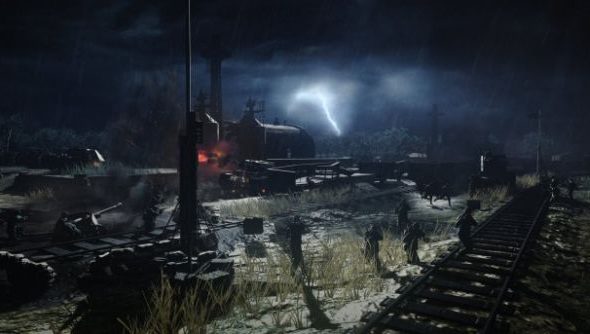 Don’t be fooled by the implied climate of the ‘Southern’ designation – unless your assignment specifically mentions the Pacific Front, you’ll merely be replacing Comrade Winter with Major Mudflaps.

Second Fronts follows the unlucky many in the Soviet army beyond their victory at Stalingrad, through the push back down to the border, past the ruined country they’d left behind. That means Company of Heroes’ new micro-campaign retains the gloom of its parent game, and a still-tangible sense of doom.

The DLC centres specifically on the Second Battle of Kharkov, which in February 1943 saw Stalin, through overestimation of his own forces, fall foul of a German pincer movement. Whether or not that happens the same way again in your game is down to your handling of the situation, I’d imagine.

Check out this steadfastly factual and unrelentingly grim sell from Relic:

And a related developer diary:

There’s a free bit accompanying Southern Front, which incorporates two multiplayer maps and Steam Workshop integration in support of the Company of Heroes 2 map editor. For the solo trudge into Kharkov, however, you’ll need to part with £3/$5. Which seems reasonable, no?