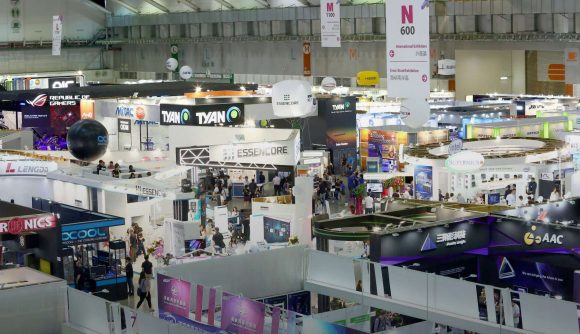 For gamers, there’s E3. For hardware enthusiasts, there’s Computex. Computex Taipei is one of the largest annual computer trade shows in the world. When Computex occurs, you can be sure to discover what some of the latest and greatest PC gaming technology holds for us, with manufacturers often unveiling important hardware for the first time.

Due to COVID-19, Taiwan External Trade Development Council (TAITRA) and the Taipei Computer Association (TCA), Computex’s two organisers, have decided to cancel Computex 2020 (via VideoCardz) and reschedule it for 2021 (can we really call a year-long postponement of an annual event a rescheduling, though?). But fear not, for there have been, and will be, some virtual events hosted to replace the cancelled 2020 expo.

Computex’s cancellation isn’t too much of a surprise considering the current pandemic – it had already been rescheduled from its original June date to September. It’s also no great shock given that a number of big hardware manufacturers, such as Gigabyte and MSI, had already withdrawn from Computex 2020. It was doubtful that the ‘big three’ (Intel, AMD, and Nvidia) would attend. As such, this official cancellation serves more as a confirmation than a turn of events.

Computex 2021, as a rescheduled Computex 2020, will be held between June 1 and June 5, 2021, to “continue its commitment of building global technology ecosystems”. Computex 2020 had great things in store for us, with many expecting the unveiling of next-gen Nvidia Ampere and AMD RDNA2 graphics cards, which are likely to be the best graphics cards of 2020 once they’re released. But these unveilings can still go ahead around this time, only minus the luxury of a multinational industry and press event.

TAITRA and TCA have said, “to keep the tech industry connected with Computex, TAITRA is launching a series of online services”. These services include:

In particular, if you want to get your Computex fix, check out Computex’s YouTube channel on June 29. Startups are some of the most exciting tech stands at Computex, as we already tend to know what the big manufacturers have in store for us. Startups, though, are always a pleasant surprise.

The organisers end the press release with a note of optimism. “During this difficult time, the organisers’ hearts and sympathy are with those who are affected around the world. In the meantime, stay strong and fight on. After rolling with the punches, the organisers look forward to seeing you at Computex 2021 and driving the resilience in the global ICT ecosystem together.”

A couple of months ago, people expected events to be rescheduled only marginally, but now people and companies are coming to realise that what’s needed is something more than marginal. Companies can still show off their latest developments, but they’ll have to do so virtually, à la Nvidia’s virtual GTC keynote. And that’s not so bad, after all. It was quite nice to see Jensen Huang’s kitchen.