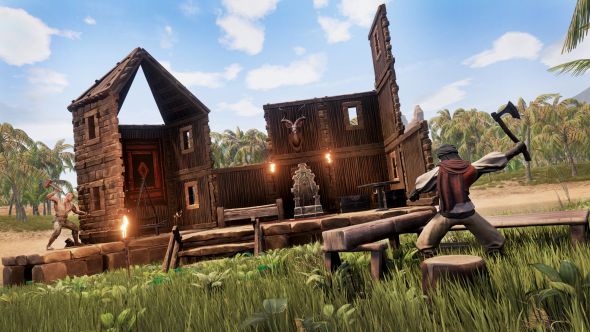 Conan Exiles developers Funcom took to Reddit over the weekend for an ask-me-anything session. On the agenda was polishing the game’s combat, adding new features, handling the game’s server issues, the developers’ eventual vision for the game and, of course, penises.

If you enjoy pitting yourself against the elements, you’ll love the best survival games on PC.

The most-upvoted question asks simply whose idea it was to customise penises, referring to the ‘endowment’ slider that lets players adjust the size of their character’s package. Funcom’s response:

“We discussed nudity early on and decided that for the lore and setting, nudity was something we wanted to go with. The slider was a natural evolution of that, especially seeing we had a similar slider for breasts. Equality and all that.”

You can read through the AMA for yourself here. Finally, on a post to the game’s Steam page, Funcom also addressed the game’s server issues.

“Unfortunately, due to the overwhelming demand for servers and our needs for administrating them, our official partner has been unable to deliver the level of quality and service we require. Because of this we have mutually agreed to end the partnership. We are in the process of finding new partners with the ideal hardware we can move the existing game databases to. However, due to the high demand for Conan Exiles servers, many hosting companies are simply out of the hardware that we need and as such this process might take a few days.”