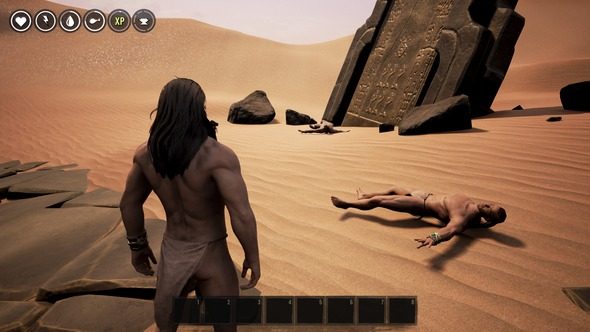 While Lord of the Rings, and more recently A Song of Ice and Fire, are the books that frequently serve as the starting point of a love affair with fantasy, it was Robert E. Howard and L. Sprague de Camp’s Conan yarns that solidified my obsession with the genre.

Conan: Exiles is the latest attempt to transpose the harsh Hyborian Age from the pages of comics and novels to video games. Previous attempts have largely been rubbish, aside from Age of Conan, a mixed bag with some standout moments. But perhaps Exiles can finally give Conan’s universe the game it deserves while at the same time spicing up what has rapidly become a rather saturated genre.

A multiplayer survival/crafting game doesn’t immediately scream Conan, a character who never dawdles and would be far too busy decapitating sorcerers and stealing magical gems to waste time gathering the materials to build an ugly hut. But you’re not Conan. In Exiles, you’re just some random person getting crucified. The titular hero does appear for a moment, but then promptly buggers off to let you play a survival game. 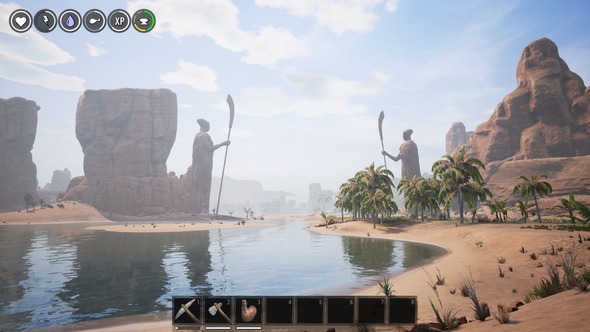 There is more to the Hyborian Age than one man, of course. Howard and the writers who followed him crafted a huge, elaborate world full of exotic religions, living gods, ancient cities with rich cultures, and myriad heroes. That’s what Funcom can draw from — an established world that can maybe add something a bit more to the well-trodden cycle of gathering, crafting and building.

Like Rust or Ark, you begin naked and useless, forced to gather the most basic of resources to create simple tools, a rough shelter, and generally avoid constantly impending death. And it’s a slog, with dull tasks taking up all the time you want to spend adventuring. You’ve got to have food, water and a roof over your head, which means constantly mining rocks, chopping down trees, and picking up branches and stones scattered all over the ground. And you need so much of everything. Frustratingly, Exiles locks all of its crafting recipes behind its RPG-lite progression system, so you’ve got to grind away before you can even make a bow, which means early hunting is a dismal chase as you attempt to bludgeon deer to death. 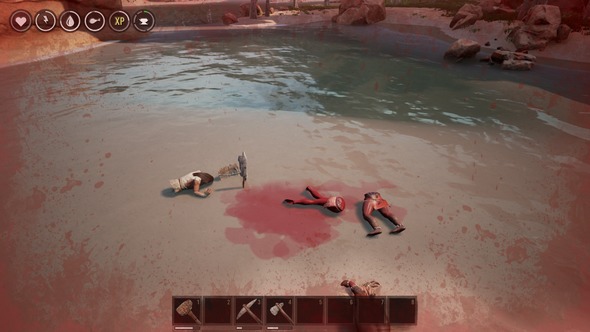 Even Conan, it seems, can’t make the start of a survival game anything other than terribly dull. But there’s hope! It doesn’t take too long putting up with busywork before you can finally craft some weapons. Swords, two-handed hammers, bows, and a shield are all craftable, so you can start punishing the nameless wasteland you’re stuck in for making you eat insects when you were starving.

Conan’s tales are consistently filled with violence and physical feats, and Funcom have really pushed this aspect of the game. It’s not just about survival, but conquest and dominance, duels and tribes of warriors colliding. Exiles, then, is appropriately filled with hostile creatures, most of whom mean you harm: crocodiles, cannibals, other exiles both human and NPC, and even demons and dark gods. This is how Funcom can make Exiles stand out, putting the action in the same lofty position as gathering garbage, which seems to be very high indeed. Unfortunately, that’s not quite happened yet.

Combat is largely brainless, dull and repetitive. Weapons don’t feel kinetic, enemies mindlessly rush toward you and sometimes just stand there and let you hit them, and every bout is a jerky brawl. In fact, I’d be down with never using my weapon again. Imagine that, in a Conan game. Dodgy hitboxes and inconsistent official server performance makes things even worse, so you’re often either blindly smashing keys or stuck in place, unable to move. 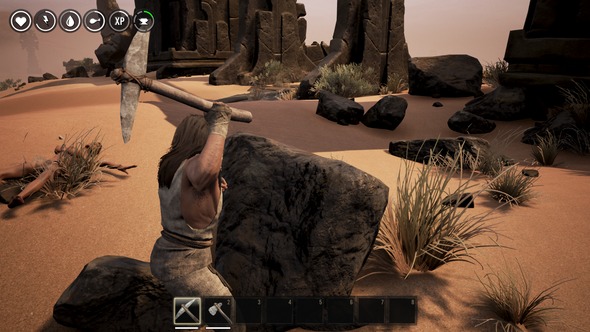 Between the survival grind and and forgettable fights, I’ve not had many opportunities for the types of adventures that typify sword and sorcery romps. The map is a striking slice of Conan’s prehistoric universe, with imposing titans guarding rivers and ominous black fortresses lording it over the land. And it’s a lively place, even in the desert where the wind makes the sand dance. So far, however, I’ve not really found much to do aside from gawking at lovely ruins. I could team up with other players or enslave NPCs and make them my thralls, but I’m not sure why I’d really need to, especially in a PvE server.

I certainly haven’t been breaking into any sorcerers’ towers to steal magical gems or saving any sacrificial victims from the knives of mad Stygian priests. I’ve mostly just been eating meat and drinking water while building my hideous house. 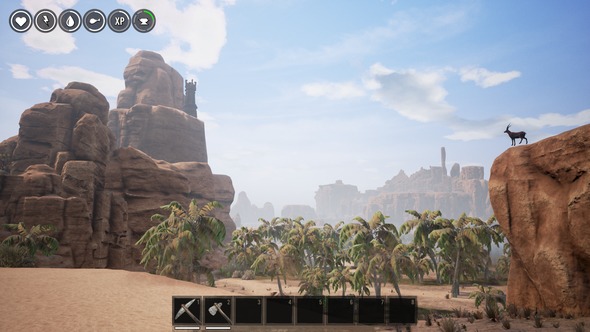 Of course, I’ve yet to see the game’s big hook: gods unleashing their cataclysmic power on my enemies. Maybe that will, for a moment, capture the thrilling Hyborian Age, but that seems too far off right now. I’ve been playing for three days and so far I’ve yet to see anything that’s more distinct than what a dozen other survival games do as well or better. It’s noticeably missing the spark that justifies the Conan name, and sure, that might appear later on during Early Access, but it seems like a huge mistake to not kick things off with what could make it unique.

At this point, Conan Exiles is just another in a long list of survival games, doing little to differentiate itself from its contemporaries. It’s Conan and Hyborian in name only, and oddly conservative, leaving little reason for either fans of the stories or veterans of the genre to visit.