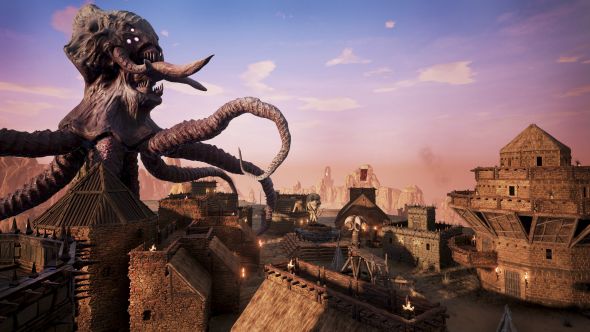 Funcom’s open-world survival-action game, Conan Exiles, has gone live on early access, so now’s your chance to get in on all the barbaric fun.

If it’s as good as good as some of the best sandbox games on PC, we’re in for a treat.

If you haven’t heard of Conan Exiles yet, this is your chance to follow in the footsteps of Conan the Barbarian, a true icon of 1980s pulp fantasy. To judge by the trailer – and the source material – you can expect to battle delightfully cheesy fantasy enemies such as giant snakes and reanimated skeletons, to unearth dark secrets in ancient ruins, and to contend with the gods themselves as they stomp across the land.

Survival elements and a base-building mechanic add to the open-world action; past trailers show the player character overlooking a city with a huge ziggurat where once there was but a small village. Still more unique is the ability to enslave defeated enemies and use them as soldiers or labourers, as was Conan himself. Mind none of them rise up and destroy you.

Also, there are ‘endowment’ and ‘breast size’ sliders in character creation, plus genital physics. It was only a matter of time, we suppose, but we probably won’t leave a screenshot here if it’s all the same to you.