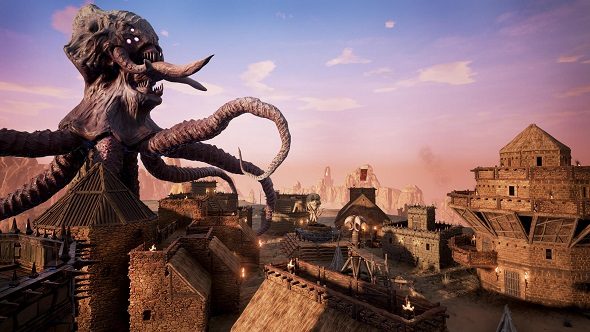 Since its release back on Tuesday, Funcom’s barbaric survival game based in the Conan universe has been struggling with quite a few issues. First it was system crashes, then it was accidentally removing Denuvo in a patch which resulted in the game being cracked in a day and now, it is continued lag problems.

For born survivors, check out these other PC survival games.

In a post by Funcom over on the Conan Exiles Steam page, the company have stated that their “official partner has been unable to deliver the level of quality and service we require” to run their official servers, so they’ve had to terminate their partnership.

As a result, the 200 official Conan Exiles servers are now offline as Funcom look for a new hosting partner. Unfortunately, “many hosting companies are simply out of the hardware that we need and as such this process might take a few days”, meaning that many barbarians have had their progress suspended if they played on official servers. You can still play Conan Exiles, but it will have to be either through one of the several unofficial servers or in offline single player.

Luckily, Funcom reassured players that they have copies of all server databases, meaning progress will be restored once they find a new server host. Funcom also took the time to apologise for not informing those running unofficial servers about the avalanche of patches that have come since the game’s launch on Tuesday.

They have since promised to “be better about the timing of less critical patches going forward” but conceded that with there being over 9000 servers, patch timing will be inconvenient for some players.