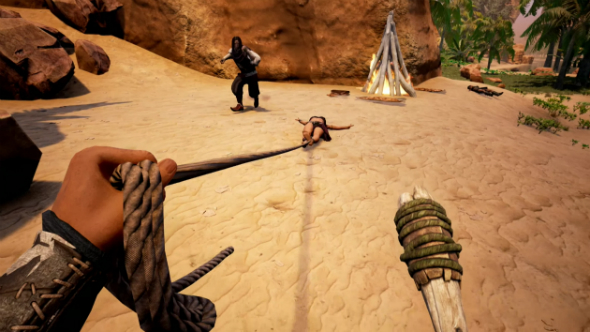 Forget Arnie’s plump, oiled bosom and mane of silky brown hair, there are no heroes in Conan Exiles. “While I appreciate the Conan movie in all its glory,” says Joel Bylos, creative director on Conan Exiles, “I much prefer this line from Pool of the Black One to correctly capture the essence of Conan: ‘The dead are dead, and what has passed is done! I have a ship and a fighting crew and a girl with lips like wine, and that’s all I ever asked.’”

For more harvesting resources and living in squalor, check out the best survival games on PC.

Funcom’s forthcoming twist (coming to Early Access on January 31) on the established multiplayer survival mode is about establishing your own tribe in a barren and dangerous land. You’re not the sole force of good in a cruel and evil world, but instead just another desperate brute seeking riches, safety and power. To achieve that, you’ll have to employ some Old Testament cruelty – sure, you can kill your foes and conquer their lands, but why not force them into slavery or tear out their heart and sacrifice it upon the altars of your god? 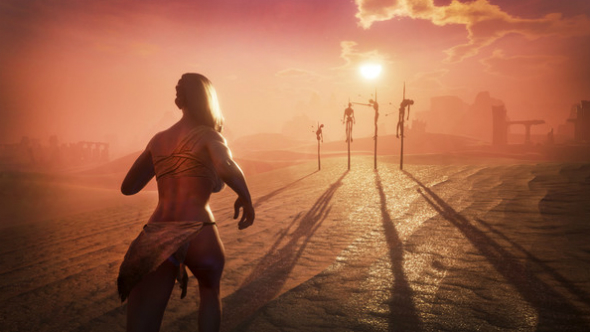 Slavery and religion are core gameplay mechanics in Conan Exiles, and how much of a bastard you’re willing to be dictates your ability to survive. That’s because staying fed and hydrated are the least of your concerns in a world full of hellish beasts and lethal sandstorms and barbarian settlements.

The Thrall system lets you capture NPCs you come across in the world, drag them back to your settlement, break their will on the tellingly titled Wheel of Pain, and then forever exploit them for all they’re worth. “There are many types of Thrall and they each serve a unique purpose,” explains Bylos. “[There are] warriors to guard your base, archers to line your walls, smiths and tanners to provide expertise and unlock cultural crafting recipes, priests to oversee your altars and entertainers to relieve your corruption.” It’s a hideously sinister idea for a game mechanic, but if there is a place for it then it’s surely in the sword and sorcery confines of Hyboria.

Slaves help you turn your humble settlement into a full-blown fortress. Religion takes that principle of letting other people do all the hard work to a whole new level, by letting you summon Avatars to fight alongside you. “The Avatars are a unique end-game mechanic in Conan Exiles, a reward and a threat for your devotion to a god (or gods). Players who follow the dictates of their religion dutifully are rewarded with the ability to summon these gigantic creatures to aid them in battle or defense,” says Bylos. Following dictates isn’t just busybody work either: “that can involve anything from harvesting humans for their flesh to dragging screaming victims to the altar of your god.” 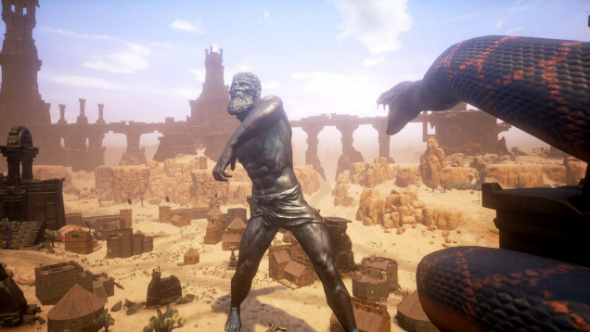 Those gigantic creatures Bylos speaks of come in two flavours: a looming metal giant and a colossal serpent. The former is most adept at attacking other settlements by simply marching through them and stamping on everything in sight, the latter coils itself around a large building in your settlement and strikes at any attackers.

These systems place a great deal of emphasis on player-made fortifications, but these won’t be a source of stone, wood and meat. One of the defining characteristics of the Hyborian Age in Robert E. Howard’s fiction is the endless cycle of civilization and decadence, and as such the game’s open world is littered with the ruins of ancient cities that the player can explore. These ruins contain great power in the form of crafting recipes and powerful sorceries, but are engulfed by corrupting forces that drain the player’s power over time.

“The overused Nietzsche quote about staring into the abyss is appropriate here,” explains Bylos. “Players who spend too much time in the presence of corrupted elements will find themselves changing, becoming frailer, their strength and will sapped. To recover, they will need to spend time relaxing, and in this we have been influenced by one of our favorite mechanics in Star Wars Galaxies, the entertainers.” 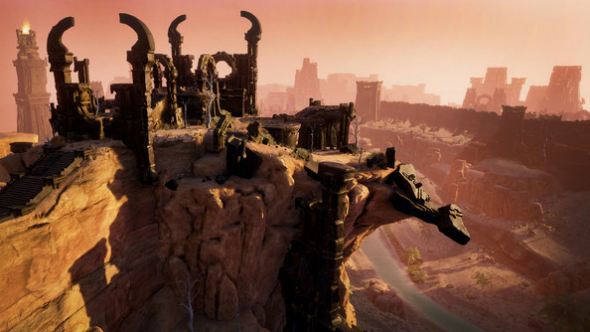 Once again, the Thrall system is important here, because to rid yourself of this creeping drain, you’ll have to enslave an NPC, break their will, and turn them into a dancer. That’s right up there with drinking wine from a skull where pulp fiction depictions of evil are concerned. But the harshness of the setting is one of the game’s greatest assets says Bylos, “We love the Conan world and we think there are hundreds of amazing games that could be made in the setting. It can be brutal and bloody and nobody will bat an eyelid. Because that’s Conan.”

The Conan world has a lore that stretches far beyond Schwarzenegger’s loinclothed crusade against Thulsa Doom, and Funcom have tried to imbue their sandbox with as much story as possible. “We’re adding more story and lore than you typically see in games in this genre, but the game is definitely lighter on story than our other games have been,” states Bylos. “This is deliberate on our end, we want to step out of the way and allow players to explore the world and create their own adventures in the sandbox, without giving them too much direction.” 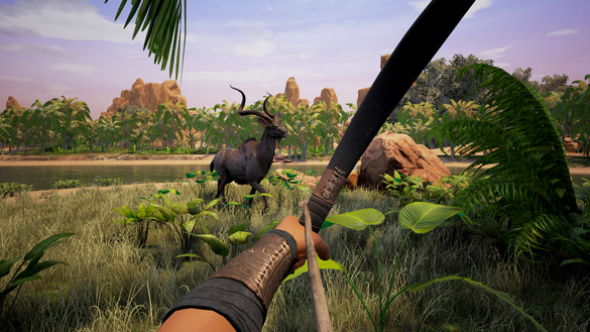 Conan Exiles might be a departure for Funcom from narrative-focussed games like The Longest Journey, Age of Conan and The Secret World, but all of its mechanics are informed by a fictional setting that’s been fleshed out by authors, directors and developers for over 80 years now. As nasty as some of Conan Exiles’ mechanics are, they’re all informed by a canon of literature, pulp comics, film, TV and games.

It’s a canon that’s steeped in silliness, but it’s helping to ensure that Conan Exiles is a serious entry into genre that’s suffered from overcrowding and creative exhaustion over the past couple of years. It gives Funcom reason to implement absurd features like slavery, marauding giants and human sacrifices without coming across as overly crass or insensitive. If anything can give the open-world survival genre the kick up the backside it so desperately needs, it’s an army of slaves duking it out with a 60-foot tall metal man.

Looking forward to sacrificing your first NPC to the altars of your gods? Tell us why in the comments below. Or don’t… this could get dark.