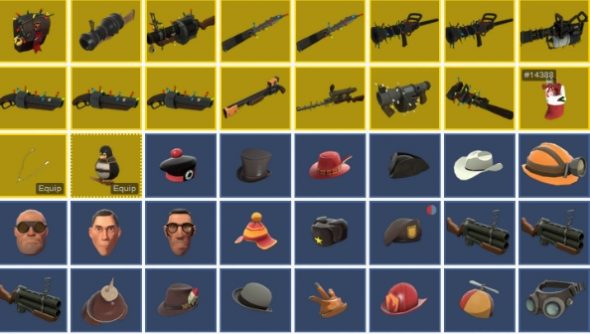 “So, I have a little confession to make. I have been running a steam market arbitrage bot for the last 4 months,” starts reddit user dmn002 in an Ask Me Anything, before detailing his story of how he built and deployed a bot onto the Steam Community Market that made him a fortune worth $10,000. Like every great Hollywood scam movie though, dmn002 gets caught by the authorities and condemned. Oops, sorry. Probably should have put a spoilers note before that.

dmn002 started his experiment at the start of the year. Previously making a small profit by buying and selling using regular methods since the Market opened in December last year, the light bulb flashed above his head during a milestone purchase. After being beaten to the post in the purchase of a SF Scattergun, dmn002 realised his mere human reflexes were not good enough to grab the best deals. And with that the plan was born. “I decided to write and run a steam market bot, which would refresh the page, and start buying things at under the market price. Buy low, sell high seemed like an obvious strategy.”

“I kept my bots running as fast as possible by locating it as close to Valve HQ to minimise ping, so I chose the Oregon EC2 region hosting it on Amazon AWS. It cost roughly $25-30 per month to host it there, and I used about 800 GB down and 23 GB up of bandwidth per month, running between 3 to 15 concurrent http threads,” explained dmn002. Starting with a mere $20, his profit soon skyrocketed. “I was able to make easy profit using this, about $100-$300 a day. I covered approx. 99% of the TF2 market, everything except for botkiller items and a few strange parts. I used catchalls and regular expressions to buy any items of a specific quality or type, for example: any genuine hats, anything with strange and festive in the name, or Level 0 vintage weapons and set buyout thresholds for each item. I was able to buy almost anything for well below market price.”

Within weeks dmn002 had an inventory consisting of hundreds of items, many of them brought for as little as $0.02. Using the trading system, he traded significant amounts of items for Team Fortress 2 keys. These keys then got sold on the market for a significantly higher price than the original item, generating massive profit. Other than the 200 item selling limit imposed, dmn002 found nothing was stopping him. With three Steam accounts automatically harvesting the best deals on the Market, he soon had a mountain of items that would make a digital Smaug the Dragon proud. “Most of the dips in the graphs on each item in the market page were from my bot buying. In total I bought over 10,000 items. I would manually resell higher value items such as salvaged crates at their market price to keep the steam wallet topped up, and just recently set up automated trading converting low value items to keys using the dispenser.tf site. It became an endless profit cycle which required minimal effort to maintain. Normal trading felt slow, boring and unprofitable. I used custom email notifications instead of Valve’s to email myself the name of the item I bought and the price in the subject line. Every time my iphone lit up, it said that I bought x for y.”

This marathon of successes was not to last though. On the 2nd May, dmn002 was banned from his Steam accounts. “Steam support has deleted all my TF2 items, worth approximately $10,000, including: 2261 TF2 keys… as well as adding a 52 week community and trade ban on those accounts.” Busted.

All that is left of dmn002’s work is a few screenshots, showing off his impressive haul. His ‘main account’, ‘buying account’ and ‘storage account’ were packed with an insane amount of gear. And now it’s all gone. Just goes to show that breaking Steam’s Terms of Service never ends well.

Reflecting back, dmn002 shows little remorse. “Overall, I enjoyed the challenge of writing the bot, and also competing with other bot writers. I am going to miss some of my items, especially the low craft numbers. I will never forget the experience of crafting those hats, it was a mixture of excitement and adrenaline, of being the first to do it.” He does find relief in not worrying about people hijacking his backpack, which must be a monumental weight off his shoulders.

Thankfully he’s giving up his criminal ways and focussing his talents on something more legally productive: “one of my goals this year is learning Python and iOS and writing an app.”