Constructor is getting a shiny new high-definition rerelease in 2016, according to developer System 3, who’d probably know about this kind of thing.

The classic city building tycoon game was first released on PC in 1997, roughly four hundred years ago, and had you taking on the role of a dodgy property magnate, overseeing the contruction of homes and businesses while protecting your empire from undesirable thugs, clowns and hippies.

Development is being led by Constructor’s original programmer John Twiddy, who’s joined by his old development chums in their quest to drag the 90s classic back into the future. 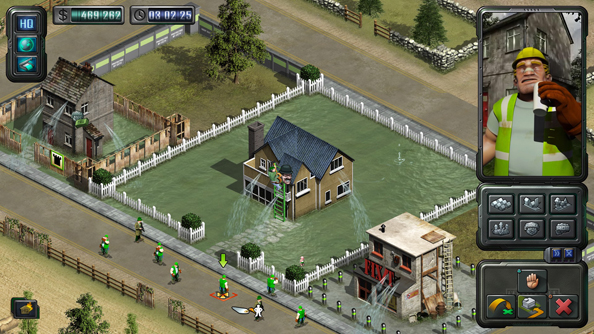 The core mechanic of hiring “undesirables” to go and bother your opponents is still very much front and centre of the game, says the developer, with the option to send hippies round to squat in empty properties, fiddle with gas mains or turn to the mob for help.

“Constructor is a game I took great joy in creating,” says Twiddy in the press release, “and having the chance to delve into its universe once again has been incredible. A whole generation adored the original. I, along with the original collaborators, am delighted to be showcasing Constructor’s unique charm to a whole new audience.”

Constructor is due to release on PC, as well as on Xboxes and PlayStations, on January 29th, 2016.