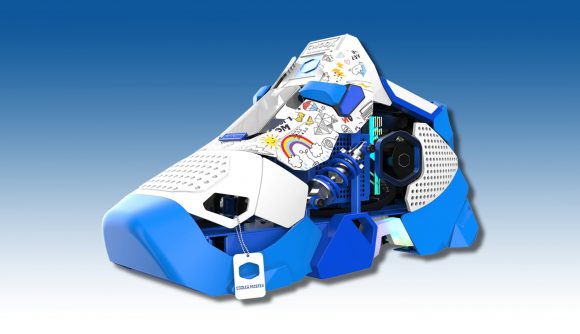 The gaming PC scene is no stranger to unique builds, from plate mail custom rigs to RTX equipped Doom BFG machines. Yet, one of Cooler Master’s next products could be a shoe-in for best PC case, as it’s actually a big sneaker.

Revealed during Cooler Master’s Chronos Summit 2022 event, the Sneaker X was first conceptualised by modder JMDF, who subsequently won a Case Mod World Series 2020 award for best art direction. Fast forward two years and the company now intends to make JMDF’s footloose framemeister a reality, and a Q3 pre-order launch date means you could potentially Lovelace it up with an RTX 4000 GPU.

The Sneaker X’s Nike inspired shape may be unconventional, but you won’t need to feel around the toes to ensure your PC parts fit. According to Cooler Master, its sole can accommodate the best graphics card and CPU options available, with vertical mounting enabling GPU fans to contribute to the aesthetic.

Cooler Master actually has a literal price tag attached, but you won’t find the cost of its PC case printed on it. Hopefully, it’ll cost less than JMDF’s original model, especially since it took just shy of $4,000 to put together.

The component company is also keeping some of its case details a secret, such as how the shoe actually opens, so you’ll need to wait till later this year to try it on for size. That said, Cooler Master’s website has some pretty 3D renders of the PC case clog, meaning you can gaze upon it before it is officially released.