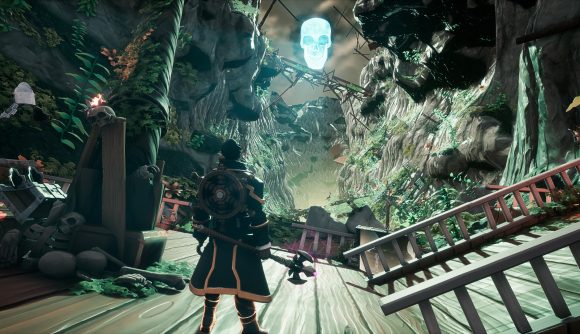 The developers of game creation platform Core have announced $15 million USD (£11.8 million) in funding led by Epic Games, giving the system some solid financial footing as it takes on its mission to make everyone a potential game designer.

Manticore Games says Core is “radically lowering the barriers to game making and publishing the same way that YouTube revolutionised video creation”. We saw this in action earlier this month at PAX, when the winning submissions to Core’s Dungeons & Dragons Design-A-Dungeon competition were revealed at PAX Online. Players without any game design experience created fully-formed D&D adventures in Unreal using Manticore’s free-to-use system, which is currently in open alpha.

Epic Games president Adam Sussman says Core represents a principle that animates Epic. “At Epic we believe the industry is ultimately headed to games becoming more like open platforms where creators can build their own worlds”, he said in a press statement. “Built in Unreal, Core exemplifies this future and goes one step further by providing the environment for anybody to create great multiplayer games, and a metaverse playground where players discover endless entertainment.”

Core has what its developers call a system of ‘opt-in complexity,’ meaning that Core will do whatever game development heavy lifting you need it to do, but also allows users to bring coding and design experience to bear if they’re already familiar with coding and scripting languages or art design. Once a user’s game is up and running, they can connect to other users’ worlds through portals, and each game is easily sharable via URL.

“We are thrilled about Epic’s support of Manticore’s vision and the Core platform,” said Frederic Descamps, Manticore co-founder and CEO. “Core represents a drastic paradigm shift in user generated gaming that resembles how YouTube or Twitch completely changed expectations and economies for video and streaming; the difference is that Core users can already produce and play high quality games in a connected multiverse.”

Whether Core can live up to its lofty ambitions remains to be seen, but as a sandbox game that lets you build RPG games, adventure games, FPS games, or just about anything else you can imagine, it’s off to an impressive start already.