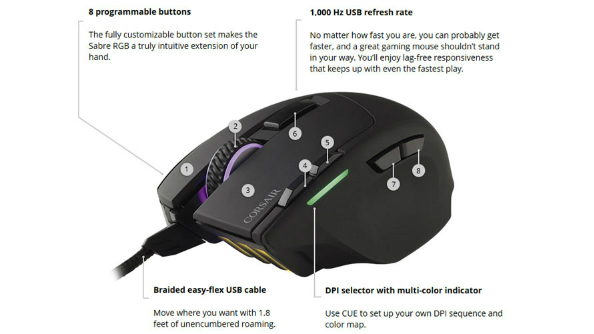 Corsair have released a redesigned and re-specced version of their midrange gaming mouse, the Sabre RGB. The refreshed version features a new 10,000 dpi optical sensor which, combined with a 1000Mhz USB polling rate, is designed for the most detailed tracking possible. There’s also a new customisable lighting layout – where would the world of PC peripherals be without those? Looking less like a Fast and Furious diorama, for one.

The four new customisable lighting zones are positioned underneath the left mouse button, on the Corsair logo at the rear of the body, on the mouse wheel and on the left hand side panel, the latter giving you a colour-coded readout of the dpi setting you’re currently using. Handy if you accidentally bump it up mid-firefight.

The remaining three can be customised to any RGB shade using Corsair’s own CUE software, where you can also specify the exact dpi settings your mouse will scroll through when you hit the adjust buttons. If you pair it with a Corsair keyboard, you can create themes and profiles for both simultaneously.

Like it’s earlier model, it’s a lightweight mouse. 100g is the weight on the spec sheet, and that’ll appeal more to the twitch shooter crowd than anyone else. In fairness, anyone looking for a new MOBA/MMO mouse would have been put off by the eight button layout, anyway.

Again like it’s earlier model, it retails at $49.99. The overall shape doesn’t appear to have changed that much, so it’s likely that the new Sabre RGB will be more comfortable to claw grip gamers than anyone using palm grip.

For more details and a full list of specs, head over to Corsair’s official site.