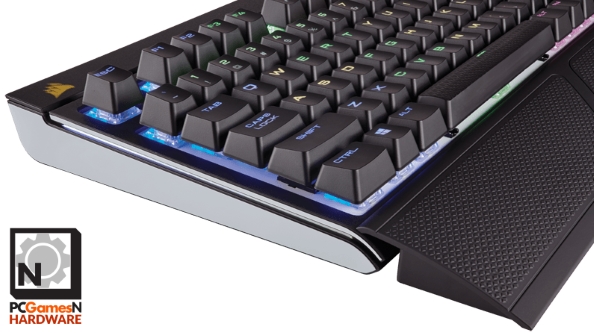 It wasn’t so long ago that both RGB lighting and mechanical switches still held novelty value in the PC peripherals game. These days though, it’s de rigueur for your keyboard to look like flyover shot of Las Vegas and sound like the intro to Murder She Wrote – such has been the rapidly escalating arms race between competing manufacturers in the peripherals space. So although Corsair’s flashy new Strafe RGB (£129/$149) model boasts millions of colours and mechanical switches beneath every key, it needs to do more to impress. And with the inclusion of Cherry MX silent mechanical switches, that it does. But we’ll get to that shortly.

Keyboard sorted? Need a new squeaker instead? Check out our best PC gaming mouse guide. Also sorry for calling it a squeaker.

Corsair’s Strafe keyboards have always catered primarily for FPS gaming, leaving the particular requirements of MMO/MOBA players (basically a tonne of macro keys) to their K-series keyboards. The Strafe RGB is no exception, leaving macro keys out of the exception but adding swappable rubberised covers for the Q,W,E,R,A,S,D, and F keys. The space bar’s also been treated to a textured treatment too, so unless you perspire actual butter while you play, you’re unlikely to get disoriented and tap at keys erroneously with this board.

In fact, the eight swappable rubberised keys are more than a bit of flashy marketing. I find it genuinely more comfortable to play with them, their angled surfaces hugging my digits like reassuring thimbles. Just because that’s one of the stranger sentences I’ve ever written in my career, doesn’t mean it isn’t true. In short: yes to the textured keys. I’m not sure the space bar benefits much from its textured surface, but it certainly doesn’t adversely affect comfort levels so I’m calling no foul and waving play on there. 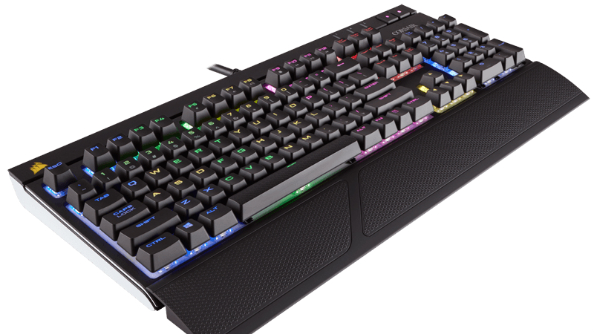 In terms of features, the Strafe RGB isn’t decked out quite as lavishly as its K series cousin. There’s a single USB passthrough connection, a brightness adjust button above the numpad with three brightness settings, a Windows key lock toggle button, and some handily oversized caps/num/scroll lock lights that signal any errant keystrokes effectively and add to the overall aesthetic.

That’s a decent chunk of functionality, but it’s lacking a couple of features I really miss from the K series boards: the volume scroll wheel and individual key lighting toggle. To adjust the volume using the Strafe RGB, you’ll need to hold down the function (FN) key, then F7 and F8 to lower or raise the volume. It’s not a major problem, but the K-series boards offer such an elegant alternative it’s hard not to lament its omission here.

As for the key lighting toggle – the K95 allows you to illuminate whichever keys you so desire on the board without having to load up any software, then toggle between full illumination and the keys you selected. It’s a really nice feature for low-light gaming, and it’s a bit odd to see it hasn’t been carried over to the new Strafe model because, well – mucking about with lighting is kind of this board’s thing. 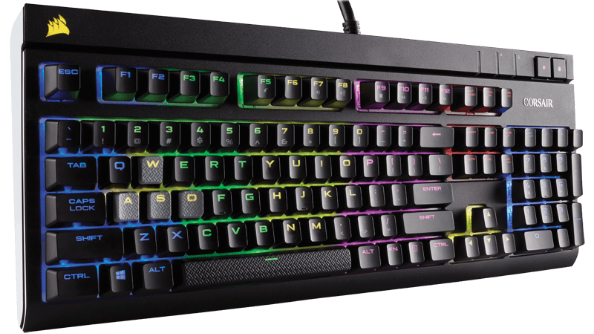 As with Corsair’s entire RGB range of peripherals, the Strafe emits the full gamut of 16.7 million colours, and they’re customisable down to the last key via the Corsair Utility Engine (CUE). More than simply allowing you to set each key to a slightly different shade of blue, from varicose vein to tech startup logo, CUE lets you cycle between colours in all manner of retina-melting patterns. Set it to cycle through all colours at a heartbeat-like pulse, if that’s your thing, or swirl around in fruit machine patterns. It’s fun to muck around with these settings for a minute or two, pretending you’re in charge of a seaside town’s fairground lights. I’m not sure it holds much meaningful value to the gamer, though.

More useful is the Strafe RGB’s per-key lighting customisation. Here you can disable lights entirely, or set different colours to certain zones – different shades for the numpad, F keys, and WSAD, for example. The Corsair logo in the top left, and two backlighting areas at each side of the board, are also customisable. By setting the entire board to emit pure white, bar the WSAD and Corsair logo (yellow, since you ask), I was able to achieve an aesthetic approaching restrained. The typeface and layout of this Strafe takes it away from the brand’s trademark look, though, and less distinguishable from other high-end boards from QPAD, Ducky et al.

Fancy lighting aside, the Strafe RGB’s headline act is its Cherry MX Silent keys, which the former produces exclusively for Corsair. The word ‘silent’ is a slight exaggeration, as you’d imagine: it doesn’t sound like you’re typing in a vacuum. However, it also no longer sounds like you’re in the newsroom of a 1950s newspaper full of antiquated typewriters – such is the din a traditional mechanical keyboard emits. The end result is a board with Cherry MX switches that offers the familiar tactile experience of the manufacturer’s non-clicky Red variant, but sounds like a linear keyboard used in office workstations and parents’ studies. 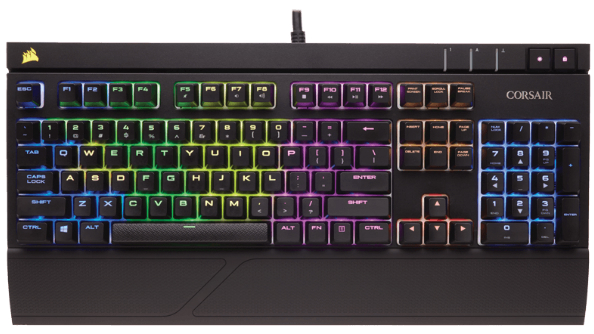 Having used mechanical keyboards (with non-clicky keys) for over four years now, I’m still not sure I’m as good at actually typing on them as I am a traditional linear model, and the Cherry MX Silent keys don’t affect that situation. However, in a purely gaming environment they’re great – buttery smooth in operation and offering nigh-limitless rollover.

There’s little to fault about this keyboard. As you’d expect, it’s built to a reassuringly high standard and offers a handful of useful features specific to gaming.

But it’s also an expensive product. And while I’m sure it isn’t cheap to include those Cherry MX Silent mechanical switches and per-key RGB lighting, those features are interesting novelties that, as I’m sure Corsair would agree, offer some enthusiast value but don’t transform or power-up your gaming experience dramatically.

Rather, they’re testament to the fact that gaming keyboards are already over-engineered well beyond our requirements as a result of increased competition between manufacturers in recent years, and our increasing willingness as gamers to buy in at an ever-increasing price point.

Let’s be clear, though: the Strafe RGB is a fine keyboard that’s remarkably unblemished by design oversights or construction shortcuts. If your budget extends this far, you certainly won’t be disappointed with what’s on offer here. The choice you’ll have to weigh up, though, is whether you’d rather have those comfy WSAD key caps, or the K95 RGB’s volume scroll wheel, macro keys and (arguably, of course) prettier aesthetic. My personal preference leans towards the latter, but both are superb options.