You’re going to need some serious PC-building skills to hide the unsightly cables from view in the gorgeous new Crystal 460X RGB case from Corsair. With two sides of tempered glass all your building handiwork is on show.

You’re going to need a sexy GPU to show off in Corsair’s latest chassis, so check out our guide to the best graphics cards around today.

We’ve had Perspex side panels before and ones with tempered glass – like the Enthoo Evolv case the DinoPC Raptor2is rocking – but the wraparound glass effect the Crystal 460X RGB is sporting is definitely new.

Built to show off Corsair’s sparkly new RGB LED fans the 460X has both tempered glass on the front as well as the side. Unlike the Enthoo Evolv though it doesn’t have a glass panel displaying all the routed cabling or unsightly underside of your motherboard. Despite the fully glass fronting, Corsair is still maintaining direct airflow through the chassis via vents around the sides of that forward panel. 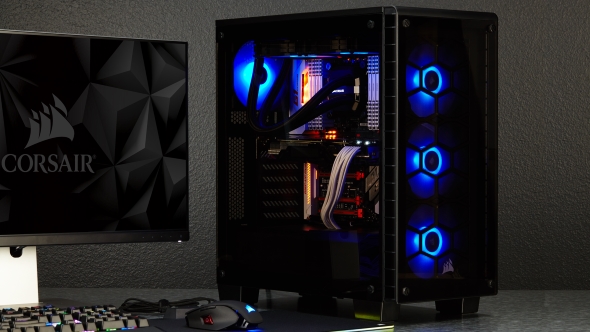 The ATX-scale Crystal 460X nevertheless remains relatively compact, to deliver a neat build with super clean lines. You’ll still get your standard mobo inside and it’ll even accommodate your multi-GPU array should you so wish. And to keep your build neat there is a full cover in the base for your PSU and 3.5-inch storage bay too, keeping the Cthulu-tentacled mess of cabling out of sight and mind.

The Corsair Crystal 460X RGB will be available worldwide from late September with a street price of $140 (£106). 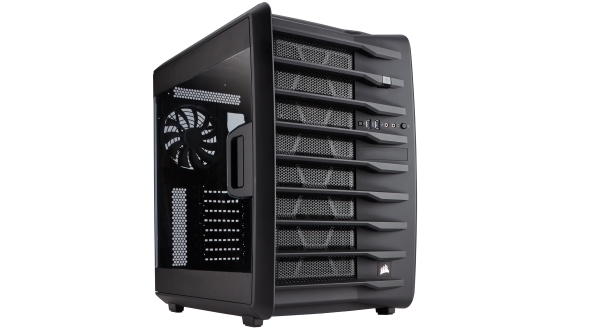 That’s not all Corsair is up to though. Aside from the fingerprint-magnet Crystal Series they’re also introducing an update to the Carbide Series Air 540. The new Carbide Air 740 uses the same dual-chamber design, locking the drive bays and PSU in the secondary chamber behind the motherboard, allowing the main ‘hero’ components to take centre stage behind the Perspex side panel.

Corsair have also acknowledged the death of the optical drive (physical media’s dead, man) by removing the 5.25-inch bays which the Air 540 had in favour of increasing the potential cooling by adding more space for fans (and water-cooling radiators) instead. It’s also got a slightly more friendly, curvier design compared with the server-box-looking Air 540.