If you want the “most elite memory” you’re going to have to hurry ‘cos Corsair’s only making 500 each of its new Dominator Platinum Special Edition DDR4 kits. They’re not messing when they call it extremely rare…

Read more: check out our pick of the best CPUs for gaming.

And as well as being rare they’re also the shiniest sticks of memory anyone will ever jam into their rigs, because Corsair have really gone to town on the aesthetics of these RAM modules. They come in either mirror-finish Chrome or brushed aluminum Blackout, in 32GB kits. Those kits come in both 4x 8GB or 2x 16GB trim and all at a heady 3,200MHz speed.

As the Dominator Platinum series has always been Corsair’s top-end range of memory these DDR4 modules are capable of hitting at least 3,600MHz in the overclocking stakes, thanks to their custom 10-layer circuit boards and the custom DHX cooling array being integrated directly into the PCB itself. 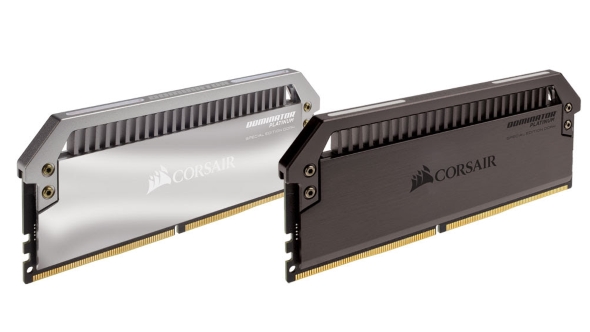 And he’s not joking either. The Chrome modules have been precision polished to get that shine and both they and the Blackout modules are hand sorted to maintain their finish. And then, as they’re being made in such limited numbers, each kit is being individually numbered with high precision laser engraving.

That said, you are most definitely paying for form over function. They may be guaranteed to be eminently overclockable, but realistically they’re not going to perform that much faster than a standard Dominator Platinum kit does; they’re already pretty special memory modules. And for the cost of these special edition kits you could get yourself something which has far greater impact on your PC’s performance, like a super-fast new Samsung SSD, for example.

But then the sort of person to whom these super-shiny sticks will be of interest aren’t going to care about pricing or relative performance, they just want the sexiest components they can slam in their rigs. And the stylish new Corsair modules are certainly they.

And after all, the sort of person coveting these special edition modules has probably already overpaid for a couple of GTX Titan X cards to fill out their PCs too.