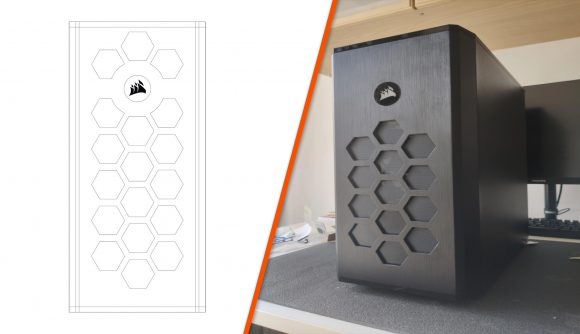 Corsair is renowned for producing some of the best PC cases in the gaming PC market, but that doesn’t mean Corsair case designs can’t be improved with a bit of sly tinkering. In fact, one modder has reduced the internal temps of the Carbide 175R by 10 degrees by adding some stylish hexagonal vents to the front panel.

Following some component upgrades, Reddit user Alternative-Draft-94 found that their Corsair case was starting to “behave like a mini oven,” with idle CPU temperatures sitting around 40-45°C. Rather than simply buying a new home for their system, they instead set about designing a honeycomb pattern on Adobe Illustrator and got to work carving it into the front panel.

Armed with nothing but a utility knife and sand paper, it took Alternative-Draft-94 “six to seven hours” to finish up the design, but not before they received five stitches in their left hand after unfortunately catching themselves with the blade. Thankfully, it seems the mod was worth the trouble, as the modder reports processor temperatures are down 10 degrees, falling in the range of 30-33°C.

While this decrease is impressive, we’d be keen to know how much more temperatures could be lowered by slotting some of the best PC fans behind the makeshift dust filter. Furthermore, we’d love to see Corsair produce an official panel in this style, as it really does transform the look of the otherwise rather plain Carbide 175R.