The Corsair Virtuoso RGB Wireless XT addresses a longstanding problem with wireless gaming headsets: microphone quality. Cutting the cord usually comes with a cost of compression that reduces your dulcet tones to a distorted mess, but this upgraded version of the Corsair Virtuoso doesn’t sacrifice your voice for freedom. In fact, it justifies its price tag as the closest wireless gaming headset we’ve seen to the best gaming microphones out there, even if it’s not quite perfect.

You get the headset, a 3.5mm headphone jack, a USB-C to USB-A cable, and a 2.4GHz dongle in the box. It also comes with a padded cloth carry case, which has just enough room to store it all. The carry case is decent enough, but not as robust as a hardshell alternative and the microfibre material inside feels cheap.

Overall, the build quality of the Virtuoso XT headset is strong and comfortable to wear. Since I’m used to far cheaper models with less tech, It’s slightly tighter than I would expect from a new headset and rested heavily around my ears at first, although I soon adjusted.

The adjustable aluminium band is surprisingly robust, and even after several months of use it hasn’t bent out of shape. The memory foam around the band still holds firm, which is something I can’t say about my previous headset.

Connectivity is the name of the game with four ways to use the Virtuoso XT. The most reliable are the 3.5mm jack or USB-C cable, with the latter offering the crispest audio quality. Although it gave me a few issues when setting it up, the 2.4GHz dongle gives the ideal wireless connection. Bluetooth is available if your device doesn’t support the USB receiver, but prepare yourself for a dip in sound quality.

Alongside gaming PCs, the Virtuoso XT also works on consoles and phones, so I have no problems connecting to my PlayStation 5. Connecting to any supported device via Bluetooth or USB is simple, though you’ll need to switch via the iCUE app to PlayStation mode if you want to use the dongle.

The Virtuoso XT also has the same clever party trick as the SteelSeries Arctis Pro Wireless, simultaneously connecting to both the dongle and a Bluetooth device. This is bolstered with separate audio controls: buttons for Bluetooth and a wheel for all other connection types. It’s a solution to very specific use cases, such as chatting with friends on devices that don’t support the dongle or keeping an eye on your video doorbell through your phone while gaming on your PC. 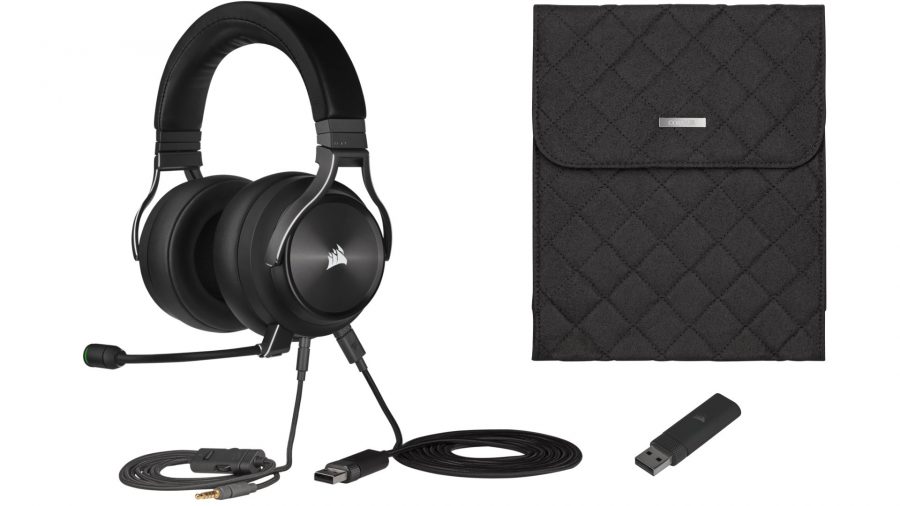 No matter how you choose to connect, setting it up is, thankfully, a relatively painless process. After downloading the iCUE app, you have complete control over the microphone volume, sidetone, and various lighting effects on the side of each speaker.

There are plenty of ways to tweak the colours however you wish, but as I prioritise battery life, I’m disappointed there’s no dedicated option to turn off these effects entirely. I did get around this by changing the colour to black, but doing so is a bit fiddly. I can also customise sound via the equaliser tab with its EQ presets. iCUE’s free version only allows manipulation via five presets, and they’re perfectly acceptable options – I find the ‘movie theatre’ preset gives me the sharpest audio – but those looking to tweak these settings manually will need to upgrade to iCUE Pro.

Don’t mind a wire? Check out the best gaming headsets

After playing around with the EQ presets, I’m largely impressed with just how good the Virtuoso XT sounds. Similarly to the original Virtuoso, it has 50mm drivers tuned to deliver a frequency response between 20Hz and 40,000Hz, giving depth and detail to the high-end tones. However, no matter how you connect the Virtuoso XT, or even if you invest in iCUE Pro, you won’t be able to resolve the headset’s biggest flaw: a lack of depth and detail in the low-end tones.

Suppose you are a PC gamer who wants to get the absolute best sound out of your headset. In that case, no matter how much you tweak it, you’re never going to get quite the same rumbling sensations whenever you shoot a gun or stand close to an explosion as you would with an Arctis Pro or Razer BlackShark V2 Pro. It’s a shame, too, not just because this is the same issue that held back the original Virtuoso, but also because the Virtuoso XT is otherwise one of the better-sounding headsets on the market right now. 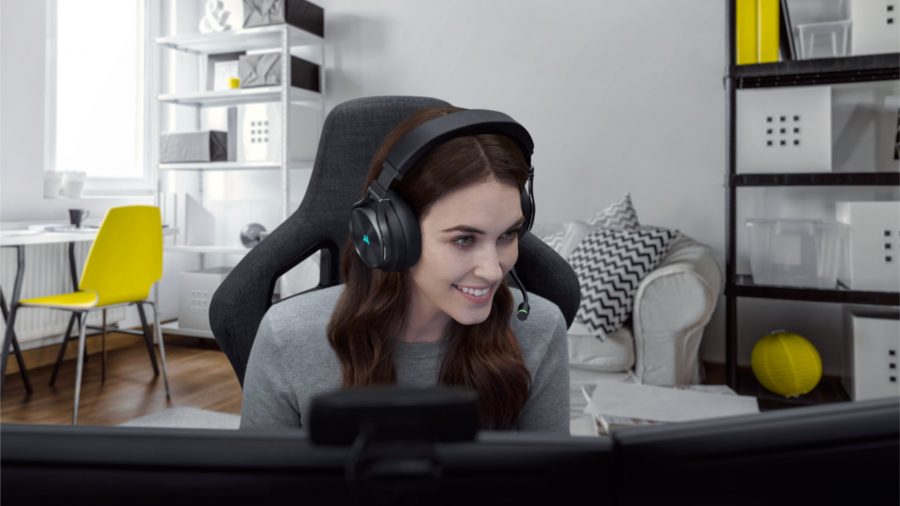 What will impress the audiophiles more is the clarity of the microphone – the key selling point of the Virtuoso XT. Corsair describes it as a ‘broadcast-grade detachable microphone’. From the many tests I’ve conducted over the past few months, it’s safe to say that the microphone’s sound quality when using a USB-C wired connection comes close to achieving this standard. It’s not quite on par with a standalone mic, but it’s crisp and clear with no audio bleed from the speakers during gameplay. When using the dongle or the USB-C connection, I hear no tangible difference in the quality of my voice. Still, sadly the microphone quality gets a little crackly when using the provided 3.5mm jack, which gets significantly worse when I connect via Bluetooth.

On top of this, the microphone is both adjustable and removable. I can remove it with ease by pulling on the base, but it’s fiddly to put it back in while the headset is on my head because the connection is at a slight angle.

Having a physical mute button on the microphone is convenient; however, audio feedback will occasionally turn off without warning if whenever I mute and unmute myself, not ideal as I rely on audio feedback to hear myself and others around me. I can quickly fix this via the iCUE app or by holding the mute button for a few seconds. Still, for someone already self-conscious about shouting instead of speaking normally, especially while wearing this headset, it’s the microphone’s only hindrance. 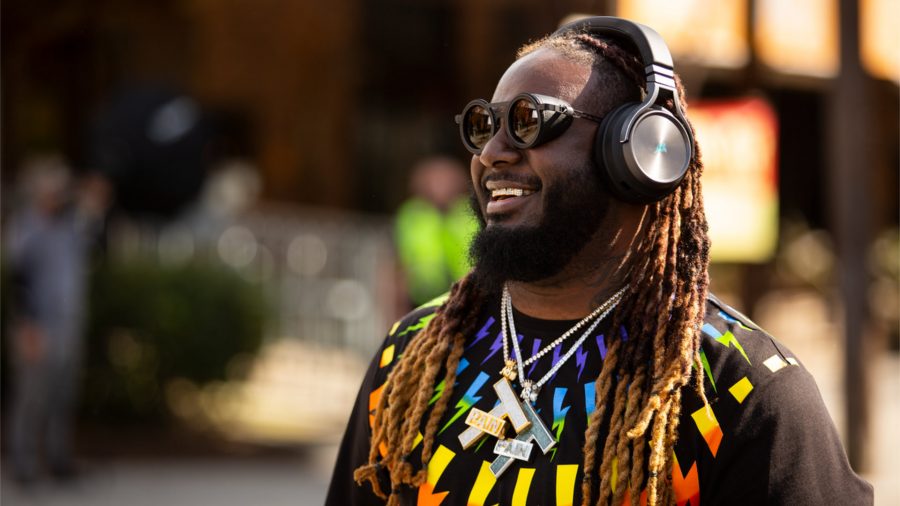 That said, there are other minor issues too, most notably when it comes to the question of the wireless battery. On a full charge, the Virtuoso XT lasts roughly 15 hours, though you can extend this for a couple of hours at least by changing your lighting settings. Unfortunately, compared to other headsets on the market, it doesn’t last as long, and it also takes a while to charge it back up to full. Normally, this isn’t an issue for me, since I regularly use the headset while charging using the USB-C cable. However, those who prefer to game wirelessly may find the lack of fast-charging a deal-breaker.

Then there’s the price. At $270 USD, £249 GBP, and €280 in Europe, it’s a relatively costly proposition. On one hand, it’s $100 cheaper than the Arctis Pro Wireless and its hot swappable batteries. On the other, it’s $70 more expensive than the original Virtuoso. 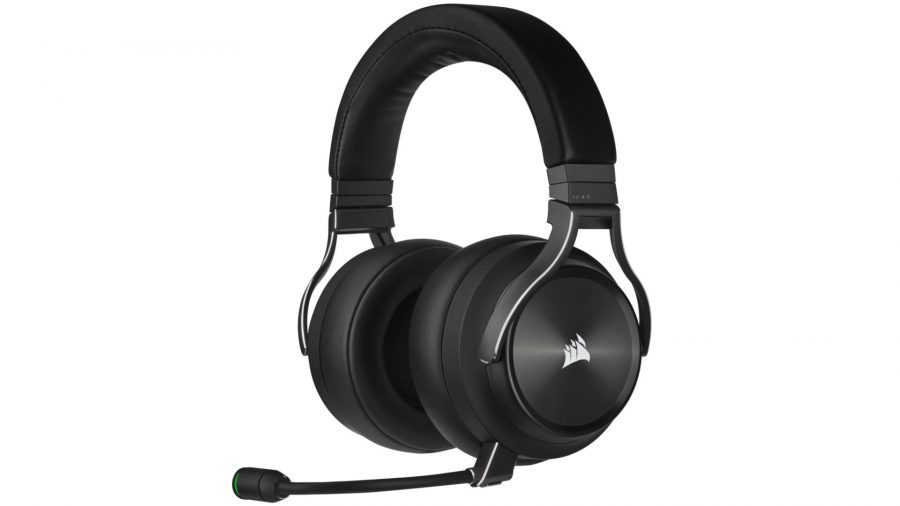 While the Virtuoso XT’s microphone is arguably superior to the Arctis Pro, it’s up to you whether or not the audio quality matters quite as much. If you’re big into wanting to stream, though, this headset may be one of the better options available right now if you’d rather not buy both decent headphones and a standalone mic. For everyone else, the original Virtuoso is still more than a reasonable mid-range option if you’d rather not spend the same amount of money as an Xbox Series S on a headset.

All that said, I’m otherwise hugely impressed with how simple the Virtuoso XT is to set up, how well it handles high end sound, and how clear the microphone is. I readily recommend it to anyone who wants the microphone to sound crystal clear, despite its sound quality and battery life being a smidge behind the Arctis Pro.

A better microphone, crisp sound, and wireless connectivity makes the Corsair Virtuoso RGB Wireless XT much better than its predecessor, but it still misses the mark for audiophiles with its lack of low end audio clarity and short battery life.