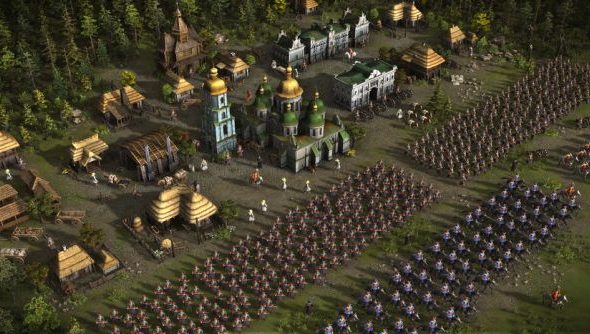 It’s more than a decade since Ukrainian outfit GSC Game World brought us the last full edition in the Cossacks series – so long ago, in fact, that the studio has been both disolved and reformed in that time.

Like a bit of strategy? Check out the best RTS games on PC here.

Cossacks 3 was officially announced last year and, though details have been sketchy since, we’re now starting to see the fruits of GSC’s labour.

Namely, Prussia. Yes, the latest trailer to be put out by the studio details the Prussian army on the defensive, sitting tight and fighting for their territory as their township is stormed by an unknown enemy.

(If you’re not well versed in European history and you’re thinking we’ve made a typo there, no we do mean Prussia. Located in what is now the north of Germany, much of Poland and Lithuania at its peak, Prussia grew to become the leading state of the German Empire, right up until the start of the First World War.)

And that’s about it, in truth. The clip is little over one and a half minutes long, but does a good job nevertheless of showcasing the game’s 90s (but still impressive) visuals.

As hinted at, GSC Game World was officially shuttered back in 2011, but came back to life in 2015 along with the Cossacks 3 reveal. The game, due for Windows, Mac and Linux, currently has a very tentative release date of 2016, which means it could launch tomorrow. Or on New Year’s Eve. We’d put our money on it coming out at some point between the two.