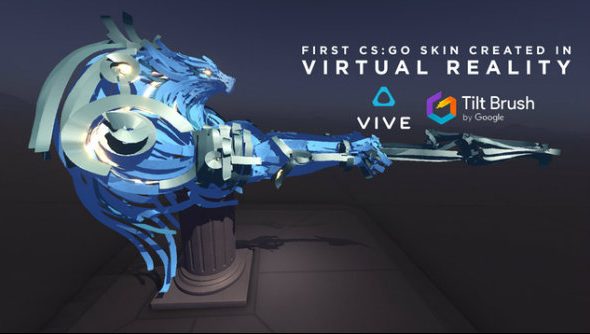 We already knew developers were going to be able to create worlds inside VR, but I didn’t think it would ever catch on. Who knew it would be a video of a man creating a CS: GO weapon skin in VR that would convince me?

CS: GO is in our list of PC’s best FPS games, obviously.

It’s almost like making art on a canvas or tagging a wall with graffiti – you can see the creator making tiny adjustments and twisting using wrist, using the Vive controllers like imaginary paintbrushes.

You can even see the artist lean in and take stock of the image as it sits there in three dimensions. It’s like his creation is a physical object sitting right in front of him, and it perfectly scales down to sit on the weapon.

The skin is called the Blue Horus and was created by C-LEGFX. Check it out in the video below:

You can vote on the Blue Horus on the Steam Workshop today.