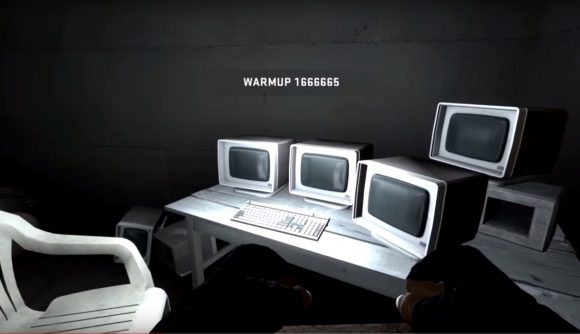 Counter-Strike: Global Offensive’s new battle royale mode, Danger Zone, launched last week, and it didn’t take players very long to uncover some of its secrets. Players have discovered a bank of computers that are hidden behind a surface-level joke that they think might be a hint from Valve about… something.

There’s a lot to unpack, but the summary (which you can check out in the video below) is that there’s a Portal-related code hidden behind the locked door of Room 3 of the mode’s motel. Valve has a long and fraught history with the number three, of course, and players think it’s some sort of Portal ARG.

Sadly, however, Valve says that’s not the case. A tweet from the CS:GO Twitter account says “congrats to all who have found our Portal Easter Egg on dz_blacksite! We’re just having a bit of fun and the Easter Egg is not a product announcement! Enjoy Danger Zone.” That’ll be a pretty definitive ‘no’ to a new game, then.

If that weren’t enough proof, it looks like Gabe Newell himself might have offered his own take on the situation. Tyler McVicker (founder of the Valve News Network YouTube channel) posted a screenshot of an email reportedly sent from Gabe Newell to a fan, saying that the the Portal-themed room is just an Easter Egg.

Congrats to all who have found our Portal Easter egg on dz_blacksite! We’re just having a bit of fun and the Easter egg is not a product announcement. Enjoy Danger Zone!

The Portal reference in @csgo_dev's Danger Zone game mode, found in the third room, was confirmed to be nothing more then an Easter Egg by Gabe himself. pic.twitter.com/hfLGunlw6E

You can check out McVicker’s exploration of the easter egg in the video below:

It’s still possible that this is all misdirection, and the Portal Room does hide some deeper meaning, but for now it’s probably safer to assume that the easter egg is just the developers having a bit of fun.