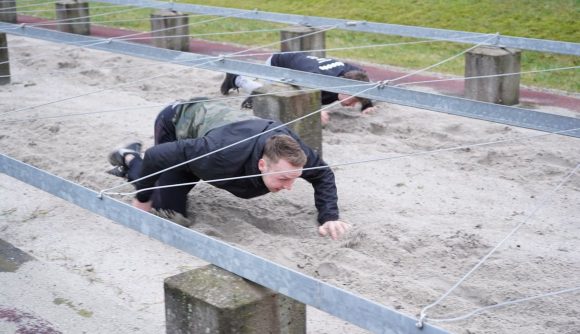 Astralis is undoubtedly the best Counter-Strike: Global Offensive team in the world at the moment. They lead the world rankings with more than double the points of their closest rival, Na’vi. They won nearly two-thirds of all of the tournaments they entered in 2018, becoming the first team in history to win the Intel Grand Slam.

As we enter 2019, Astralis is making clear that they intend to stay on top (as I write this article, they’ve just tweeted to say they’ll work hard to make that happen this year). But success on the screen sometimes requires team-building away from your computer.

With that in mind, the Astralis players have been bootcamping in Copenhagen. As well as practicing their smokes, the five Danish players took a trip to Svanemøllen military barracks where they took part in a set of drills. Crawling under wire might not have much of a parallel in competitive CS:GO, but Emil ‘Magisk’ Reif’s ability to hold onto pit could prove crucial when you’re defending A site on Inferno.

Whether the team will retain their top spot in 2019 remains to be seen, but I’d suggest that their dominance in 2018 will take some beating.

To start off 2019 on the right foot, we're teambuilding and bootcamping in Copenhagen!

Elsewhere in CS:GO, the game has had a record month. Since going free-to-play, the shooter saw 20 million unique players in December.

Read more: Astralis look back at their magnificent 2018

Sadly, however, that came with its own issues, as Valve was also forced to ban a record number of players over the Christmas period – and the vast majority of them came from the company’s flagship FPS.