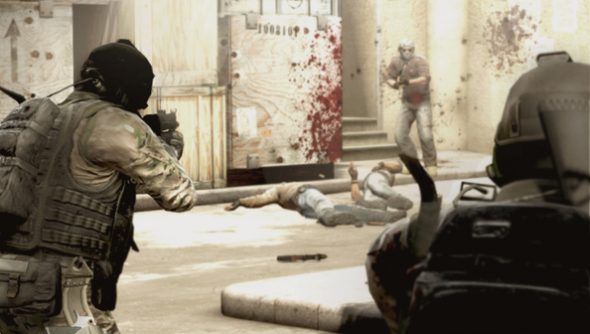 The battle royale craze may well be coming to Counter-Strike: Global Offensive after a screenshot of developers playing on what’s believed to be a ‘survival’ map was leaked. The map, titled xl_enclave, is in the official survival map pool, and while it’s not known if it’ll be a fully fledged fight to the death – there are rumours it could be part of the FPS game’s new operation.

The new information was leaked by Nors3 on Twitter, who hinted that the new mode was called Survival. He wrote: “Devs are testing Mode Survival for Op9. Probably people gonna leak the image but I won’t do it, let them work.”

Tales of a Survival mode aren’t new though. Back in May, one Redditor discovered a map called survival_island, localisation tokens referring to phases, players left and survival time, and models with /props_br/ in the pathway, so Nors3’s screenshots might well back those claims up.

However, Nors3 clarified in a tweet to Rod ‘Slasher’ Breslau, that he doesn’t think it’ll be a battle royale like PlayerUnknown’s Battlegrounds or Fortnite due to the fact it will be running on Source. So, don’t get your hopes up for games involving 100 people. If it happens, it’ll probably host under 30 fighters. And, while we may be overdue a new operation, there is no guarantee that the mode will arrive at the same time – or even at all.

Either way, the leak shows that battle royale is still at the forefront of developers minds. But if the current timeline is anything to go by, we might be waiting a while for this. If you can’t wait that long, and can’t bear to face the dusty desert of Miramar or the party bus ever again, there are a number of Hunger Games inspired maps for CS:GO on the community market for you to sink your teeth into.