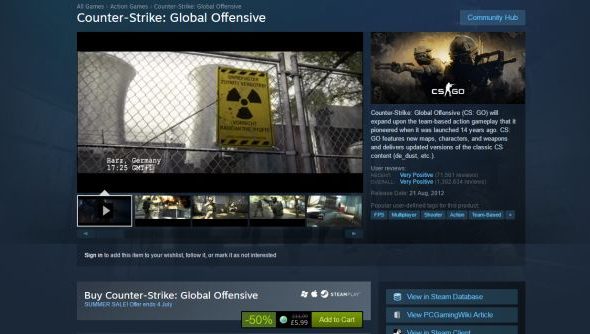 For many the Steam Summer Sale isn’t just an opportunity to buy games, but to get them for friends as well. However, for Counter-Strike: Global Offensive on this year’s edition Valve aren’t allowing folks to do so. In a statement posted on Reddit they’ve said this has to do with community growth, however much of the community believes it will also impact the secondary market of CS:GO that allows hackers and other cheats to quickly and cheaply acquire new accounts.

No money at all? Here are the best free Steam games to go with instead.

The statement confirming that they won’t be giftable at all in this sale comes from Ido Magel, a level designer at the company, posted to the CS:GO subreddit yesterday.

While he doesn’t give any specific examples, it’s fairly easy to see how friends, relatives and anonymous online comrades might not be too keen on a super-hardcore game like CS:GO if they didn’t invest in it themselves, or once whoever bought it for them stops playing with them regularly.

That said, a separate thread on the subreddit is praising it as a move against cheaters and smurfs (that’s good players buying new accounts just for the pleasure of stomping noobies). Not making copies of the game giftable when it’s at its cheapest prevents industrious individuals buying them up to sell on later at cheaper-than-normal prices for a small profit. It’s through schemes like this, often using third party websites, that less noble customers usually grab a new account after a previous one gets banned or begins to reflect their actual skill level. One poster gives a good example of the headaches it causeshere.