So ends The Summer of E-Sports, just in time for the weather to take a turn and dash any hopes you had of seeing the sun this year. After kicking off with Dota 2’s The International, the month concluded in a feast of digital sports last weekend. Among the season finales, each worthy of a daytime telenovela, were League of Legends’ regional Summer Splits and that other Valve game that people play for money, CS:GO.

It seems easy to dismiss Counter-Strike from Valve’s portfolio of market-busting e-sports money turners. Though ESL Cologne’s poster moneyshot still sat at an immodest $250,000, that’s pocket change compared to even the individual earnings of TI5 champion Sumail Hassan, as the 16-year-old Evil Geniuses player siphoned $1.3m off the $18m total. And despite pulling in more than a million concurrent viewers on Twitch and hiring out Germany’s biggest indoor arena, ESL’s second Major of the year didn’t turn heads on BBC News. So would CS:GO benefit from The International treatment?

“I think the main thing is that people think about it incorrectly when they make these arguments, it’s really not a question of how much money it is, but how it’s being distributed,” says James Lampkin, ESL’s VP of pro gaming. Lampkin handles much of the operational side of ESL’s tournaments, including working closely with Valve to provide their CS:GO Majors, which are backed and part-funded by the developer/publisher/omnipotent deity. 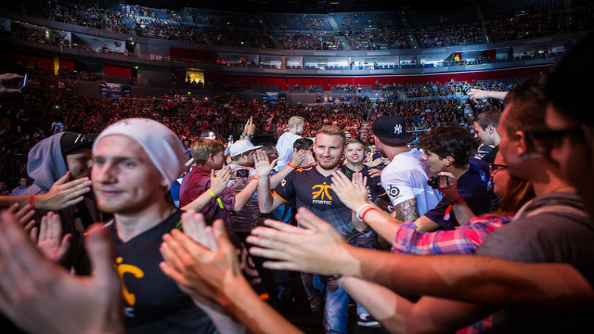 Money enters the e-sports ecosystem in a variety of ways, creating a flow diagram which wouldn’t be too far from a geography text book’s depiction of the water cycle. The bottom line is that the expected total income for CS:GO players this year is $10m. Of this, tournament prize money makes up only a fraction, as Lampkin explains. “Really where all the actual money comes from – in both Dota and CS – is through the community,” he says. “The Dota community prize money is very public and easily available, but until now it really hasn’t been that available in CS. Only recently did valve come out and say $4.2m from this event went straight to players and teams.”

This extra income is from the sale of stickers, small cosmetic items to be applied to fans’ guns in-game. It’s a relatively small price to pay to support your teams, but it really adds up. “I think all the teams got some good sticker money from this tournament,” tells tautologically-named Ninjas in Pyjamas player Adam “friberg” Friberg. “Especially since Valve added stickers to each group so every team in a group splits the money equally.”

There is an important distinction here between the two games that doesn’t see much exposure, which is that every team, even those at the group stages, are coming away with considerable amounts of money. “And that’s one of the main reasons why I’m a fan of the Majors system; opportunity,” says Lampkin. “If you look at the Dota 2 final, there’s one match that determines if people become millionaires or not, which is a great story. But if we’re talking about the health of the ecosystem and making sure that everyone has an opportunity to make a living, I like the idea that there are a bunch of different opportunities thoughout the year for them rather than relying on a few matches.”

It’s not just frequency of Major events, though, as anyone who watches Dota will tell you that there are almost too many tournaments a year to keep up with. However ESL have seen the problem that the same teams turn up to these tournaments, after beating away everyone during qualifiers, and they’re working to set it right. 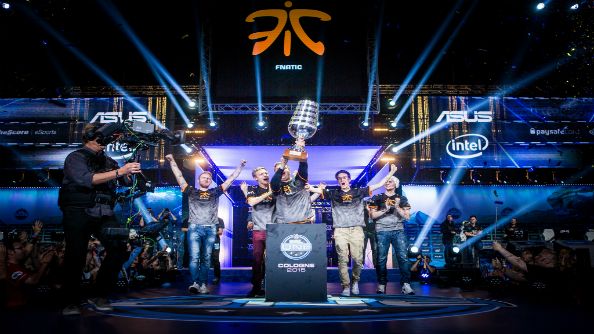 After ESL announced they would be putting $250,000 of their own money into ESL Cologne to be matched by Valve, many thought this would result in a $500,000 prize pool at the event. However, instead of inflating the champions’ pockets, they chose to distribute it further down the chain, at local regional qualifying events.

“We gave a lot of these upcoming teams that aren’t being seeded, not only the opportunity to make it to a Major, but also experience in a streamed environment and prize money for these events,” Lampkin reveals. “We think this is a really important part of the ecosystem, and we hope it will become a part of the Dota ecosystem in the future. Because as great as it is for these top tier teams to make a great sustainable living, we’d love to see that opportunity get expanded to a lot of others.”

It isn’t just organisers and those at the lower rungs of the ladders who agree on this approach though, as ESL Cologne champions, and winners of back-to-back Majors, Fnatic also want the wealth redistributed.

“Obviously we are very lucky in the seat we find ourselves, winning multiple Majors,” says Patrik Sättermon, former CS pro and currently chief gaming officer at Fnatic. “But let’s look from other teams’ perspective – it’s great to expect three Majors a year with hefty prize pools.

“If it was the case that we just have one Major, what happens if you fail that? You go into TI expecting so much and you place high expectations on yourself, but then you only place Top 16. You’ve spent your entire year planning and preparing for this tournament and there’s far more at stake with this kind of event, which heaps pressure on you as players.” 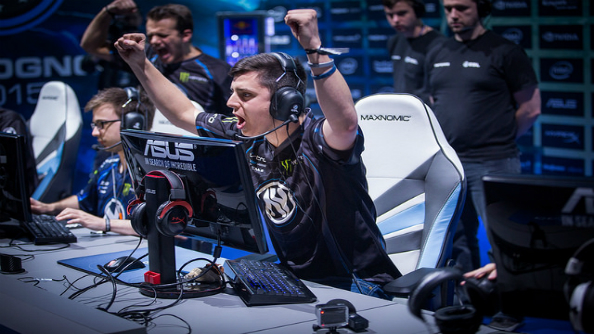 Spreading the pressure, and wealth, seems to be a universal opinion within the e-sports world too, as Valve is actually beginning to adopt the Majors format for Dota 2, with the first beginning this autumn. Speaking to IGN just after TI5, Valve’s Erik Johnson said: “We’re pretty comfortable with different projects taking different approaches to solve similar problems. As a company we actually learn more when we do that. If we all point everything in the same direction, we’d have a real blind spot for when we’re screwing up. In some ways, you want to diversify a bunch of decisions across different projects because you zero in on the right answer quickly, as opposed to ‘we have this thing that’s working, everybody do that right now.”

Perhaps the answer that Johnson has zeroed in on, then, is to combine what works from both CS:GO’s tournament structure, and Dota 2’s bombastic once-a-year spectacle. So how would a hybrid option suit players?

“I think that hybrid option could be the only feasible one, not stepping away from what we have and going all-in on one event,” Sättermon said. “It’s intriguing to think about if you can tie things together at the end of the year, using all the storylines that the Majors and other tournaments have fed into. Though I think we have to be aware that boosting the prize money and spectacle too rapidly might cause disruption and complications in the ecosystem itself.”