Good news, sportsfans: referring to you all as sportsfans is going to continue to be technically true, if this latest report on eSports’ upward momentum is anything to go by. Newzoo, a games marketing research firm, has put together some thoughts on the fate of eSports in 2016 and beyond. The message is growth, growth, growth, if not free money for all. The number of people watching and, more importantly for businesses, how much they’re willing to spend are both trending stratospherically.

The impact of eSports is clear in our picks for the best PC games.

A key factor in the report is differentiating between enthusiasts and more casual fans who only tune in for massive events. They split the total base about 50/50, with slightly more enthusiasts now and projected for 2019 than there are casual fans. This is good in that these folks are more likely to buy merch, tickets for events and so on rather than stick to online streams. In fact, here’s a look at exactly how much they spend, including a predictable conclusion: 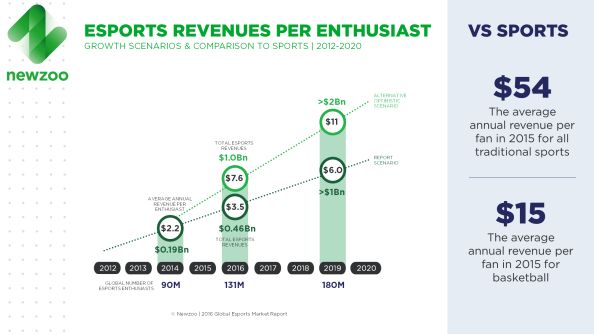 As you can see, currently enthusiasts spend just a couple of dollars each per year on eSports, on average. That’s only 15% of the basketball number you see there, and a strong indication of something that’s always been obvious – all the six figure stream viewership in the world doesn’t easily translate into profit. With the idea of paying for higher quality streams almost uniformally rejected, it’s about merch, tie-ins and prize-pool donations. How that will rise depends on which initiatives are taken by different companies and how they incentivise spending.

The audience figures themselves are also interesting, showing a majority of viewership coming from Asia-Pacific. This doesn’t match up with my personal observations, where the streams that do best on Twitch are always at peak European times, when the Americans are awake but it’s not so late we’ve gone to bed over here in the UK and further east. Russia is a big hit for specific games too, but things like the League of Legends Korean scene get far lower viewership than their NA counter-parts. Of course, Twitch isn’t the only place that it’s possible to watch these things, and Chinese/Korean-specific streaming services doubtless have their own viewerbase.

The money, however, is coming mostly from North America: 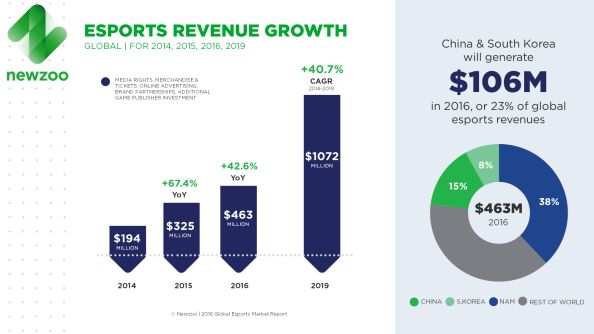 Yep, that’s a billion dollars predicted to be in the scene by 2019. That’s just eSports, not games as a whole, and based on current patterns. If you’d made a similar prediction five years ago, I doubt you would have expected what we have now. Games, as always, moves incredibly quickly. You can read the summary of the report on Newzoo’s site, or drop just under $5,000 on the full 80-page thing. I don’t know what’s in there, because that’s a little out of my price range for news story research. Sorry.