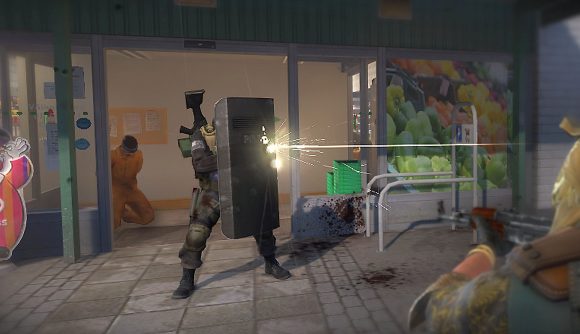 Following the launch earlier this week of Counter-Strike: Global Offensive Operation Riptide – the FPS game’s latest, and 11th, big operation – Valve has posted a batch of fixes and gameplay updates addressing some hiccups. There’s a handful of noteworthy changes with the patch, but the most notable are that the studio has stopped the game’s Terrorist side from being able to pick up the Riot Shield, and that the maximum cooldown penalty for griefing has been increased by a whole lot.

First up, that cooldown change. The maximum cooldown penalty for griefing in the game has been dialled up by a pretty huge amount, with Valve explaining in the patch notes that it’s been “increased from one day to 14 days”. That’s good news for players keen to see bad behaviour addressed, with this surely being a significant motivator to cut out the griefing and play nice.

As for the Riot Shield, this is a new weapon type added to the multiplayer shooter with Operation Riptide, which was – as you’d probably expect – only supposed to be available to the Counter-Terrorist side through the game’s buy menu in Casual Hostage map groups. However, the notes suggest the T-side could get their hands on the new bit of defensive kit through CS:GO’s “buy-via-donate” option – so, the ability to do that has now been removed.

Elsewhere in the update, Valve explains it’s fixed an issue that was sometimes causing crashes to happen when players dipped into multiple games of Danger Zone in a row. There are also some client launch option changes that should help reduce instances of crashes, slow loading times, and stuttering. Sweet.

Release Notes for today are up. We’re fixing a crash, removing the ability for Ts to buy the Riot Shield and more: https://t.co/HAbUP90lzh

If you’re keen to see the full rundown of hotfixes and follow-up changes for yourself, head to CS:GO’s site here. For more on what the new operation brings, go hit that link in the intro up there.