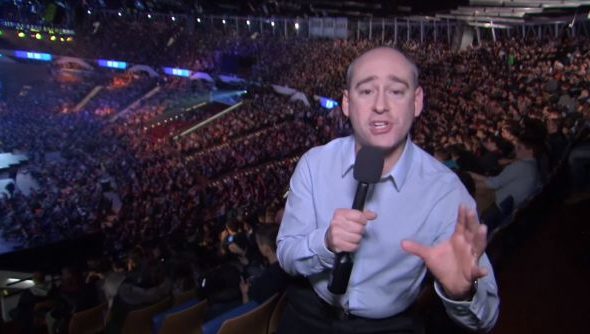 Turns out Twitch weren’t the only ones taking footage at IEM Katowice last week. Sky Sports were also there, the broadcasting juggernaut making their own, hour-and-a-half long highlight reel of the CS:GO tournament, with a bit of explanation and coverage filtered in. They chose a hell of a time to go for it too, the Polish tournament being one of the best CS:GO has seen in some time. Having, I assume, already been broadcast, it’s now up on YouTube to be viewed by all.

CS:GO makes our list of the best FPS games, naturally.

It’s respectful, introducing the game and the teams with the same professionalism you’d expect from any sports broadcast. If anything, I’d have expectedmore explanation of what was going on, the casting of CS:GO being jargon-filled to help decrease the time things take to explain. Well worth a watch, even as just the best bits of a tournament you’ve already seen:

I feel like it’s very odd a bigger deal isn’t being made of this. Given the hype whenever ESPN broadcasts the odd MOBA tournament, Sky Sports creating an hour and a half of program like this is fairly huge. The views on the video at time of posting are just 22,000 – less than a tenth the number of people I saw watching the tournament live simultaneously. I was linked it by a friend, rather than finding it via any CS:GO community or other gaming forum. It’s important to spread this sort of thing so it happens more, and the eSports scene can continue to grow.

It’s a format I really like and, other than some awkward censoring of sponsorship logos they don’t have the rights to display, it’s a really well put together show. Just familiar enough that you could show your dad and he’d understand what was going on, without being over-simplified to the point of being patronising to regular gamers. More please, Sky.