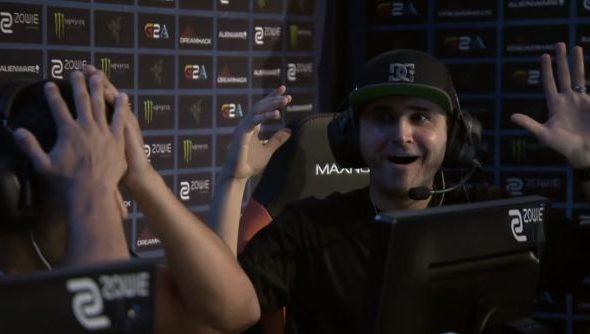 This will take a little bit of setup. Last weekend was the Dreamhack Austin CS:GO tournament – not a major, but a $250,000 prize pool with plenty of good teams, so everybody’s taking it serious. Among those attending were Splyce, a lower-level American team, who had the game’s largest streamer and ex-pro Jaryd “summit1g” Lazar covering for one of their absent members in his first tournament in some time. On day one they lost fairly heavily to current big boys Luminosity Gaming, meaning they would face Counter Logic Gaming in the lower bracket for their tournament life. They go up 15 rounds to 11, meaning one more round win puts them a game up and in good shape to take what would be a surprising win.

One of the best FPS games in the world. Just don’t, well, do this.

Summit, playing badly by his own admission, manages to get the clutch final kill and goes to defuse the bomb. This was moments after throwing a molotov to catch out his opponent in the 1v1. Then, well, this:

That’s not okay at all.

Not only did Splyce go on to be pushed into overtime, but they would lose the game and the match 2-0. The highlight you see above immediately shot to the top of the CS:GO subreddit, while that area of the map has a new, inspired nickname. Summit himself has reacted the only way you really could, a touch of humour, a lot of humility:

People always ask me what the most embarrassing thing that's ever happened to me was. Well now I can answer it.

The rest of the pro community reacted with sympathy, all having rather been there before, if perhaps not quite on the same stage. Summit looks like he won’t be returning to pro play after this, as he feels his level of play wasn’t up to par, even outside of this particular unfortunate event. He talked a little about it on his first stream after, start at about 1:10:00 into this archive.

I’ll leave you with the most savage response, from caster Jason “moses” O’Toole. As PCGN eSports officianado Chris Higgins put it to me, there’s ice burns, and then there’s causing active damage to someone’s psyche.

To be fair, summit probably turned to look at twitch chat 🙁