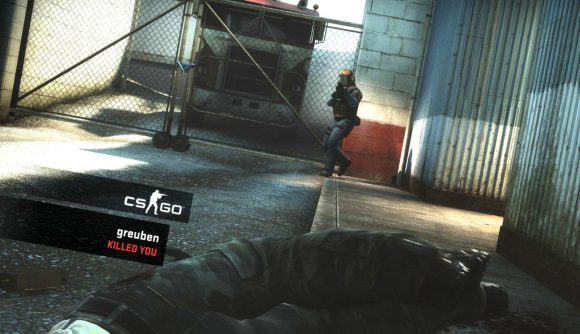 Valve’s bold choice to release a new Half-Life game as a VR exclusive was divisive. However, the Half-Life: Alyx reviews are in and the studio has done a stellar job of innovating and building on a beloved series, demonstrating that the medium can deliver a fully fledged gaming experience. Now it turns out that after development on Alyx concluded, the VR devs all wheeled their desks en masse towards the CS:GO offices, and refused to move until they were let in – so now, along with those Half-Life: Alyx launch goodies, we’re getting a VR mode in CS:GO, too.

Valve has already identified potential pitfalls with the new format, Walker explains. “One of the challenges we faced when developing CS:GO VR was the movement. When I first loaded into Dust 2 in VR I instinctively tried to crabwalk, fell over and hit my head on a large orange box. A lot of our creative decisions from that point onward can be traced back to that moment.”

Asked what this means for the CS:GO competitive scene, Walker said, “We realise VR competitors are going to need a lot more space when it comes to LANs. So we’re going to innovate once again and construct each map out of cardboard boxes in the centre of the arena. We realised this might cause problems with interference between headsets and cable tangle, so we’re actually just going to remove them altogether and give everyone nerf guns.”

Valve has also been looking into introducing virtual reality modes to its other IPs. Gabe Newell recently tried out VR in Dota 2, and has calibrated his ranked MMR entirely in first-person showcase mode, achieving Rank 400 Immortal. He said it was easy, and we quote: “I don’t know what all you weenies have been doing”.

CS:GO VR mode will be released accidentally during the next patch.