Here’s the beauty of Global Offensive: even though I’m extremely late to the Counter-Strike party, for the first time in the series I can jump into a game with a few friends and not get annihilated. The matchmaking works: a remarkable feat in a game where players’ experience can range from a few hours to 20 years.

Back up: Global Offensive is the first Counter-Strike that I’ve played competitively. By competitively, I mean, in Competitive Matchmaking, of course, not to a respectable level. I understand why this might be off putting to some, though. Counter Strike’s skill ceiling is scarily high. 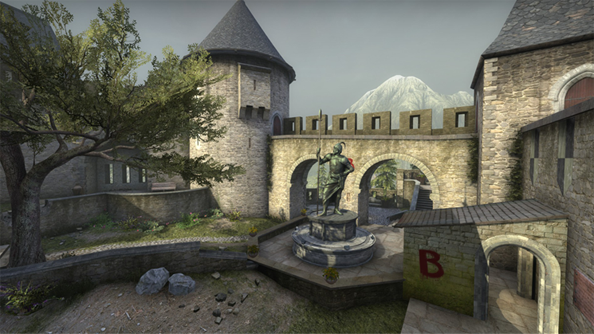 That skill ceiling is what brings me back. Take the guns themselves: different recoil patterns, accuracy, armour penetration, clip sizes, weight. I’m not ashamed to admit that in my first 30 or so hours of CS:GO pretty much depended on the P90 – one of the more forgiving SMGs in the game, and one that got me consistently mocked for being a noob. But I was a noob.

It worked though, for a while. As I progressed up the ranks I discovered the downsides of the trusty P90, and started to buy M4s and AKs due to their increased range and headshot potential. That moment of personal progression meant a lot to me, far more than unlocking a foregrip in Battlefield or a red-dot sight in COD.

There’s even learning curve to chucking a grenade. For a frankly humiliating amount of time, they were a hindrance, something I’d buy because it seemed like the right thing to do. 90 per cent of the time I’d flash myself, or bounce once off the wall at the wrong angle and injure my teammates. That kind of thing really pisses people off, so I kept them in my pocket. 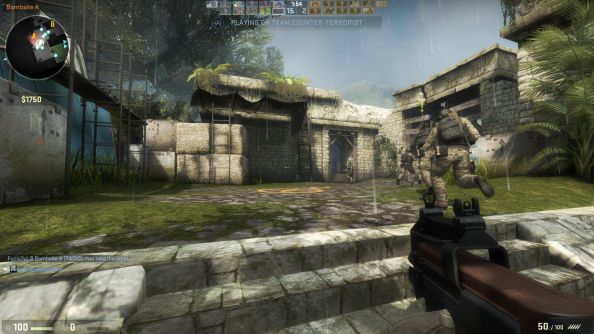 Thankfully, I died a lot, and got to watch more experienced players mop up after my mistakes. It’s another thing that puts impatient players off, but the waiting was my CS School, and I had an excellent record of attendance.

To get good at DOTA, I feel like I need to play the AI many, many times, or open my browser and study. In contrast, I’m constantly learning during a Counter Strike matches, alive or dead, winning or losing. I watched other players make the same mistakes that I was partial to and recognised their blunders. I saw better players use the tools that mystified me to good effect. I slowly understood the importance of Ecoing in the right rounds, and explaining your death succinctly instead of shouting “Fuck!”

Other shooters might have the depth, but none have drawn me in like this. Why? Because I miss caring about winning and losing. A simple concept, but something that’s missing from shooters of late. Call of Duty and Battlefield are far prettier games but, unless you play in a dedicated clan (something I don’t have time to do), they’re an oddly lonely experience. Win or lose, it just doesn’t matter as long as you get your unlocks. In CS:GO, communication is key and, thanks to the excellent ranking system, people are desperate to win. As a result, most keep their mics live, and their tactics tight. These matches can last over an hour. Better make some friends quick, eh? 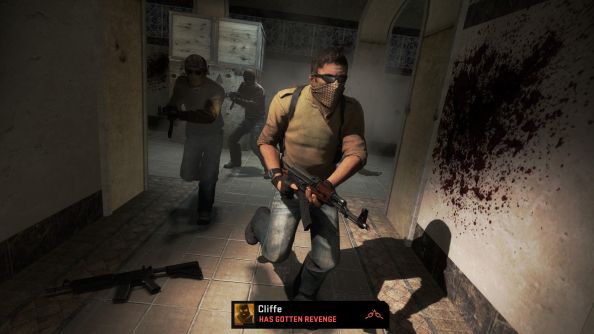 Then there’s the drops. Unlike TF2’s potpourris of weaponry, it’s all cosmetic, but The Arms Update, introduced in August this year, has added a new level of persistence to my Counter-Strike sessions. Before, during, and after every match I look at my guns with pride. It’s a personal thing, your CS:GO inventory. Are you the type to show off a Neon SSG, or more of an Anodised Metal kind of player? Do you brandish the 5 Year Veteran coin, showing your dedication to the cause, or the Operation Bravo medal, proving your support of the community? These things matter.

CS: GO has reinvigorated my love for competition, shooters, and the exotic delights of flashy guns. I’ve even written an almost pornographic text adventure at csstory.net.

I’m extremely late to the party, but it’s still banging. Come on in! Stay awhile. Pop open a crate of guns! There’s plenty to go round.

Owen Hill is Mojang’s chief word officer. You can challenge him to a round of CS:GO or bother him about Scrolls patch notes on Twitter.