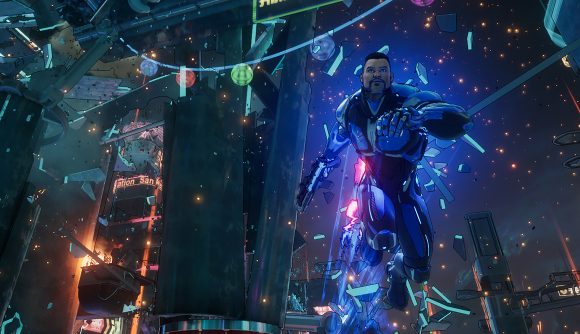 Crackdown 3 pre-loads are already live, over three months before the game is scheduled to launch. Don’t worry about the space it’ll fill on your hard drive, though – currently the game weighs in at a svelte 7MB. It’s unlikely that the final game will fit on a short stack of floppy disks, so this placeholder ‘pre-load’ is a bit superfluous. But hey, if you want a tiny slice of Crackdown 3 files on your PC right now, you can make that happen.

Beyond the comedy value of a tiny file size, this release is notable as the first time a Game Pass title has been available for pre-load on PC or Xbox One. You can install the game via the Windows Store, and you’ll get two files for your trouble – Crackdown 3 and a separate multiplayer launcher labelled Crackdown 3: Wrecking Zone. Each weighs in at roughly 3.8MB.

As you might expect, trying to launch either executable gives you a cute little ‘you’re too early’ message. The Crackdown 3 release date is now scheduled for February 15, bringing an apparent end to years of delays.

Those file sizes will grow significantly close to launch, assuming there are none of the usual issues around Microsoft’s store. Company gaming chief Phil Spencer says he’s taking a hands-on role in fixing the Windows Store – and yeah, Microsoft has made big, unfulfilled PC gaming promises in years past, but simultaneous releases for first-party titles across computer and console have already been a major step forward.

We don’t know how big this install will end up being, since the Crackdown 3 system requirements make no mention of hard drive space. Given that the release date is still months away, it’s likely those file sizes are still up in the air for the time being.